Things did not start well last week. The weatherman was promising some much needed rain so I decided to move a couple of bags of multi-purpose compost we’d had delivered.

Now I should have gone off and got the wheelbarrow but they were only 56 litre bags. Well I carried one over to the potting shed and my back was really paining me. I hadn’t misjudged the bag, just my current abilities. So the rest of the day was spent moving like a 90 year old. Happily it much improved after a night’s sleep and ibuprofen. 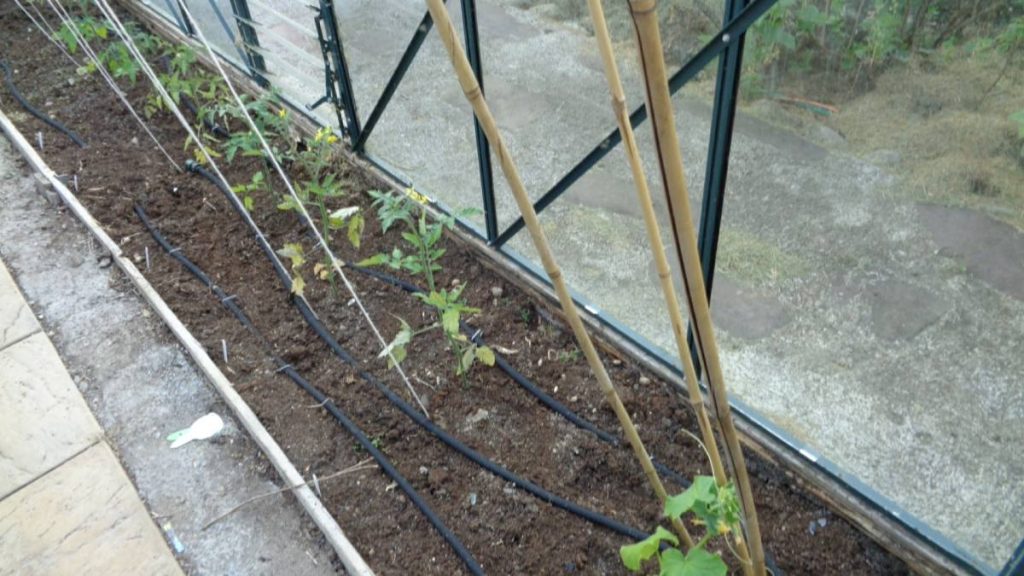 Tomatoes planted out in the greenhouse border

Started planting out the tomatoes in the Vitavia greenhouse border. I actually started a couple of days before by thoroughly soaking the border. Being in the shelter of the greenhouse it was bone dry. Rather than just water it with hosepipe or can, I used the soaker hose so the water really had time to get it properly wetted.

The first plant to go in was actually the gherkin cucumber. Rather than string supporting it I set up a couple of canes for it to cling onto. It’s already forming fruits and starting to look pale as it’s used up the nutrients in the pot. I expect growth will explode now. 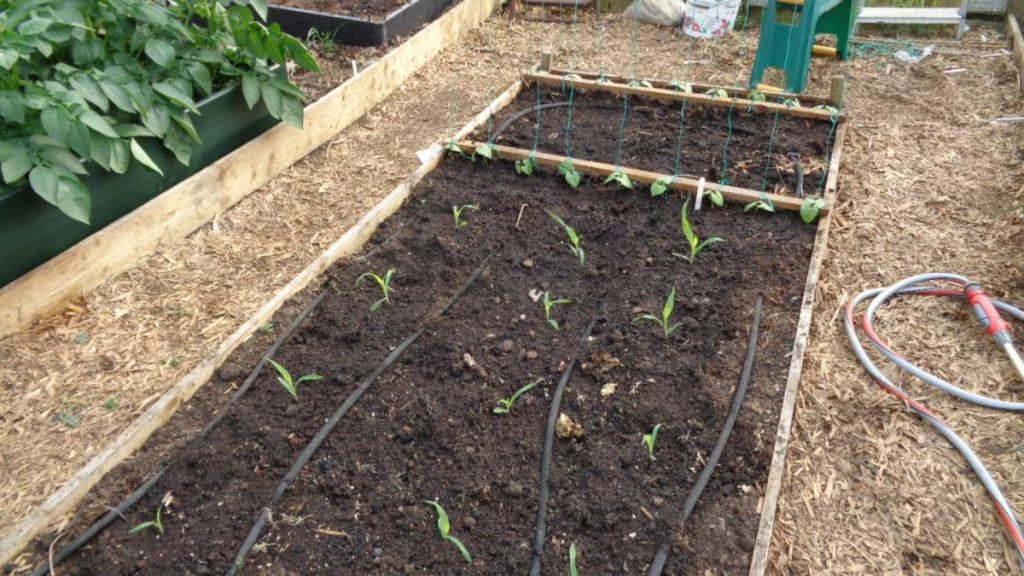 Sweetcorn and beans in the polytunnel centre bed

Up in the polytunnel I’ve planted out the sweetcorn. I’ll be interested to see how it does this year. I started by adding activated biochar to the bed, working it in to the top of the coil with a 3 pronged cultivator along with a good handful of chicken manure pellets per square yard.

Normally the trick with sweetcorn outside is plenty of space between plants, 18 ins. apart each way is ideal. In the tunnel where space is at a premium and it’s very warm I’ve gone for just 12 ins. apart. Plenty of water and feeding should push a good crop but there’s always a risk of failure when trying something new.

To cover that risk I’ve started chitting more corn to go outside. I’m hoping that the shelter of the walled vegetable garden will be enough to protect the plants and get a decent crop. Tons of manure should help too!

The back of the bed has had Cobra French climbing beans planted to grow up the strings to the crossbar. However, not enough plants for both ends so sown some blue lake up for that end. 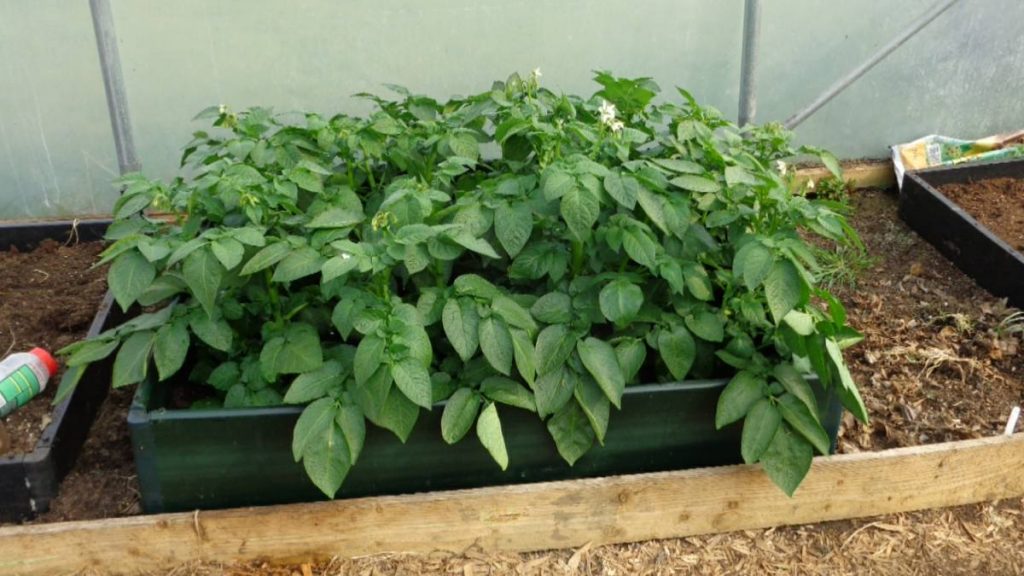 The Colleen potatoes are flowering, a sure sign of of tuber initiation so should be eating our own new potatoes in a couple of weeks. They’re really healthy looking plants too. If the taste is anything like, I’ll be growing this variety again.

The elephant garlic and ordinary garlic in the side bed look to be doing well. Not a lot better plants than outside but no losses over winter so more productive, I hope. 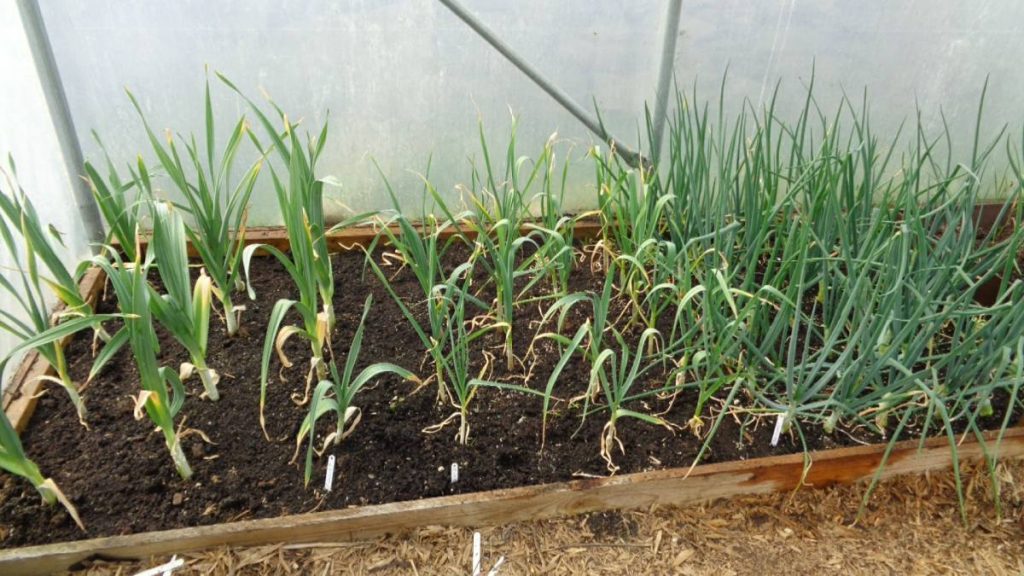 Disaster with brassicas and spinach

Well I made a really silly mistake. The only thing I can say in my defence is we’ve had a lot going on which has distracted me and made me take my eye off the ball. The seeds may or may not have germinated but they’ve cooked. Literally cooked.

The weather has been glorious with strong sunshine and whilst the greenhouse vents have been open, keeping the temperature reasonable, the light hitting the seed trays under their covers has taken them to oven temperature. Luckily I’ve more seeds and so it’s sow and sow again (couldn’t resist that!)