I had a reader enquire about how to produce Pomato (Tomtato) plants. This is a plant formed by grafting a tomato plant as scion to a potato pant as rootstock. 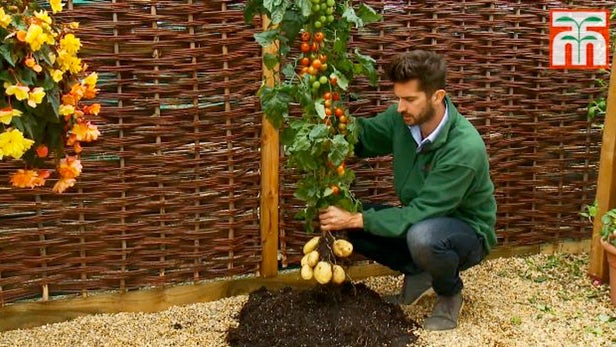 The TomTato plant from Thompson & Morgan

First of all, to be absolutely clear you cannot cross-breed a tomato with a potato to create a Pomato. Both are members of the nightshade family, solanaceae, and share the same number of chromosomes. This means they can be quite easily grafted together successfully but not inter-breed.

You can graft other members of solanaceae like aubergines and peppers to potatoes. Incidentally, it’s possible to graft members of the cucurbitaceae together – e.g. cucumber scions on pumpkin rootstocks.

According to this paper: Evaluation of Compatibility, Growth Characteristics, and Yield of Tomato Grafted on Potato (‘Pomato’) the concept was developed by Oscar Soderholm in 1930 and later this plant was initially developed by the Max Planck Institute, Germany, in 1977. However, I distinctly remember seeing adverts for this ‘miracle plant’ around this time – possibly the early 1980s.

One year there were loads of adverts and I assume a lot of sales because the end of season reports were of poor performance. I remember one quote “The worst of both worlds” After these reports, interest and adverts for these hybrids waned and died.

In 2013 Thompson & Morgan launched the TomTato® (Ketchup ‘n’ Fries™, Ketchup and Chips) which was a cherry tomato grafted to a potato. They don’t state which varieties they have used – I suspect that’s a trade secret – and the product shows as ‘no longer available’ on their website.

Whether this is due to being out of season as I write or the plant failed to take off and so was dropped from the range, I don’t know.

Producing Your Own Pomato Plants 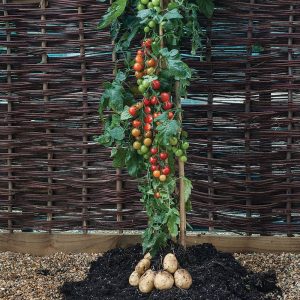 I don’t think it is easy to produce your own Pomato plant. More accurately, I think it would be a very difficult task to both produce the plant and a worthwhile crop.

First you need to select a variety of potato and tomato that will perform well. The only references I can find are to varieties from India. Probably an early or second early potato and a cherry tomato.

Then comes the physical process of grafting. Grafting is common with tomatoes with fruiting scions joined to vigorous rootstocks to produce more trusses with more and better fruits. Some commercial growers actually get 27 trusses per plant using grafted plants. Whilst the largest growers buy in grafted plants, smaller market gardens may well grow their own scions and rootstocks grafting the two together themselves.

Grafting does require skill and practice to get right. Rather than me try to explain how to graft tomatoes, I recommend watching this video from the University of Vermont Extension, USA.

How to Graft Greenhouse Tomatoes

Feeding and Care of Pomato Plants

Assuming you’ve got the graft to take and the plant is alive, it’s going to take careful growing. Both tomatoes and potatoes are plants that require heavy feeding to produce their fruit. The combined plant, the Pomato, is doubly demanding. This required additional feeding in itself can cause problems with calcium depletion and nutrient locking unless very carefully managed.

Are Pomato Plants worth growing?

As a curiosity or just for the challenge, certainly it’s worth growing. I’m sure you can get a better crop of potatoes and tomatoes with less effort growing them separately.