Whilst writing this catch-up I realised there’s a theme to it. Hence the title – Penny Wise, Pound Foolish It wasn’t planned, just happened. Still, it’s a good point. We all look for value but there are times when saving a few pennies costs pounds in the end. Or a lot of effort, reduced crop etc. 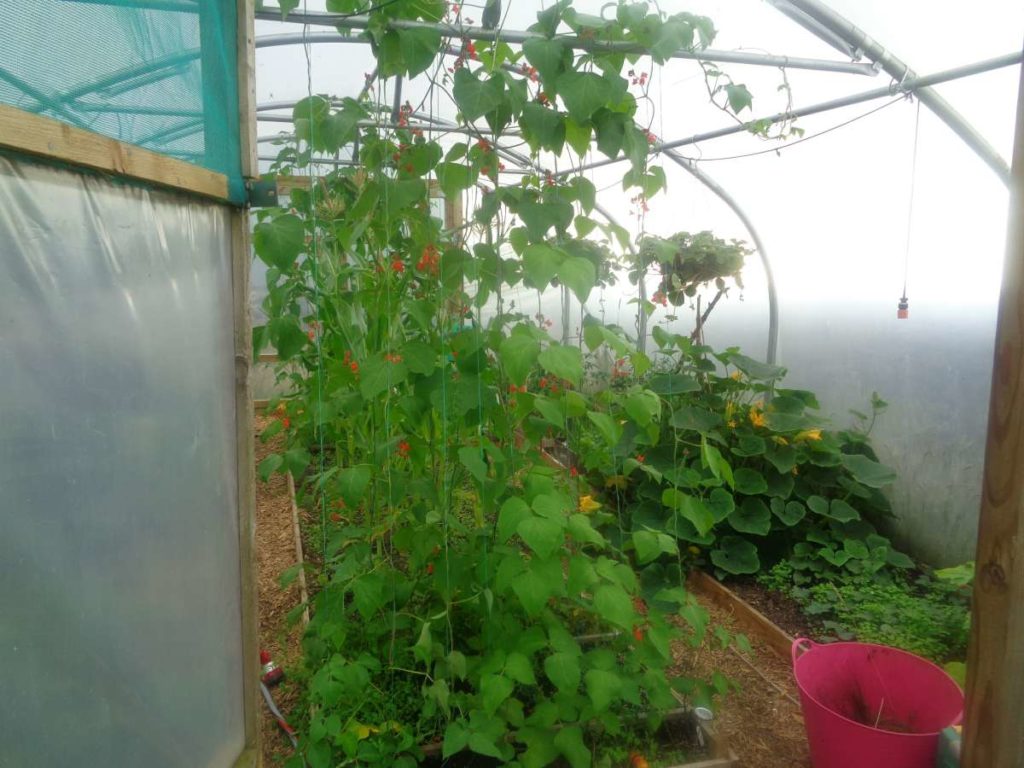 Just about room to squeeze into the polytunnel!

We’ve had a nice bit of very needed rain over the last couple of days so I’ve been in the polytunnel. It’s all go in there. The beans are at the top of their strings, the sweetcorn shooting up and generally the tunnel is full.

Harvested 11 Kg of Charlotte potatoes from a square metre bed, which isn’t too bad. I was disappointed with the Charlotte and Arran Pilot seed potatoes from Wilko this year. They were over-sized and shooting rather than sprouting in the bags. It wasn’t noticeable in the bag and I’d have taken them back if we lived closer to the store.

Next year I will stick with my local garden centre where you pick your own tubers out of a barrel. They may be a few bob more but well worth it. I was a bit penny wise and pound foolish, as they say. 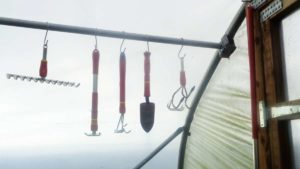 One area where I’ve definitely not been “penny wise and pound foolish” is in my tools. I’ve a small rake, large cultivator / hoe, trowel, small cultivator and a blade / spike hoe hanging on S hooks along with a short handle hanging on the door frame. They’re inter-changeable so if I’m using the cultivator outside the polytunnel, I use a longer handle.

They’re all Wolf Garten so they’ll outlast me. Hope my daughter will appreciate her inheritance.. sorry we spent all the cash!!

There are squashes forming on the Uchiki Kuri and I’ve had some gherkins already (Partner F1). The Marketmore cucumber, however, is going slowly as are the peppers. I’m wondering if it’s worth growing large cucumbers at all. These small gherkin cukes are just enough for two of us – so little waste. My grandson loves them too, he’ll happily sit there and eat one for a snack.

The strawberries have really slowed down but I’m continuing to feed them so they build strength for next year. I’m using tomato feed from Bridgewater Garden Supplies. They sell it as a concentrated powder. They suggest mixing it 40 grams per litre of water to make a concentrate and then further diluting 20:1 to make a usable liquid feed.

I mix up the powder at 200 grams to 5 litres and keep the concentrate in an old screenwash container in the polytunnel. To use I add half a litre to a ten litre watering can.

Preparing for the greenhouse

Before erecting the replacement greenhouse, I want the windbreak fence up. It’s sod’s law – if I don’t have the windbreak up another storm will arrive in short order to demolish it.

The posts are pressure treated and the palisade fence panels have been pre-sprayed. I want these to really last though, so treated them with Cuprinol. That’s gone up to £26.49 for 5 litres now! Still, it’s back to pennywise, pound foolish. This time I hope I’ve been pound wise as I want the windbreak to last and a decent preservative will certainly help extend life.

Digging the post holes was a right task. The problem here is the volume of stones in the soil. Eventually 3 holes, two feet deep were dug. The stones were picked out and reserved to back-fill the posts.

The soil was taken up to one of the empty compost bins. The light coloured sub-soil is actually quite a good texture once the stones come out. Once it has some organic matter in it, it should be a decent growing medium.

The new compost bin is heating up but not as I’d like. It’s stuck around 40ºC and I’d like to see it up to 60ºC, 55ºC at a minimum. I think this is down to three things. Firstly, I didn’t shred some of the materials like field bean stalks. Secondly I think the C:N ratio is wrong. Ideally it would be 25:1 to 30:1 but I suspect it’s low in carbon. Thirdly, the shredded material lower down may have clumped, preventing oxygen getting through to most of the heap.

I’ve a Bosch Rapid AXT 2200 shredder whose performance has left a lot to be desired. Last year I replaced the worn blade with a generic cheap one from Ebay. It improved performance but not a lot.

I really fancied a Viking shredder but my requests for funding were denied by she who keeps the privy purse! So I tried buying an actual Bosch blade despite it being near twice the price of the cheapo. Yes, we’re back to the penny wise, pound foolish theme!

I put it into the shredder and it was amazing. I put some prunings in and it just snatched them out of my hand – spitting the bits out at the other end. No endless pushing the materials down and the machine choking every five minutes, needing opening and clearing. Just feed down the funnel as fast as I can. I think it will now cope with the sappy green waste that clogged it up before.