Our One Week Summer

Finally some lovely weather, a real Indian Summer. I’ve noticed we often get a good September here in Wales but I do wish that the rest of the summer lived up to it. Still a chance to catch up with a load of jobs outdoors.

The big garden shed hasn’t been painted since it went up, so that’s a priority. It’s one of those jobs that you can put off but shouldn’t. We’re all much the same, put up a new fence or a shed and immediately paint it with a protective but then we forget it and wonder why the wood rots a few years down the line.

I’m using Cuprinol which isn’t cheap at £25 for a 5 litre tin but has a great reputation. The weather here is tough on wood, horizontal driving rain and winds, so the protective stain weathers quickly. The wood is really soaking it up, a sign I should have done it a year or two ago. In the end it took two and a half tins.

I think it’s worth it though to protect and extend the life of a shed that set me back nearly £1,000. Shed painting ate up a day and a half including clearing a mass of nettles that had established behind it.

Over in the greenhouse the tomatoes are ripening thick and fast now. One of the plants is producing very large fruits, the biggest so far actually weighed in at 840 grams. I don’t think I’ve ever grown one that big before. I’m not sure of the variety though as the label says black Russian. I suspect my grandson may have helpfully re-arranged the labels at some point. He likes helping! I’ll go through all the labels and figure it out when I get chance. 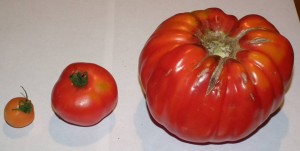 Sungold, Ailsa Craig and ?? – 840 grams of ugly but tasty tomato

We must be getting a harvest of a couple of kilos a day at the moment, including the odd giant. The Ailsa Craig seem a bit larger than usual this year but the Sungold are their normal size and wonderful sweetness, Sadly I can’t get grandson to try Sungold – tomatoes are red and so it’s not a tomato and anyway he doesn’t like tomatoes ‘cos they’re yucky. I’d forgotten how funny little ones can be about food, especially when they suspect they’re being fooled for some reason.

Some of the plants are near the end but others are going strong and all being well will keep going into October if not longer. I wonder if I stopped them a bit early but it’s always a bit of a guess and it depends on how the weather goes. November could be mild with sun or we could be under snow. British weather, don’t you love it?

We’ve more cucumbers than we know what to do with although the crystal lemon cucumber plant got mildew so I’ve consigned it to the compost bin. It’s the first and last time I’ve grown that variety. Ball shaped and tasty but the skin is thick and hard which wouldn’t matter but the shape makes peeling difficult.

Loads of peppers both sweet and hot. Val points out that we’ve enough dried chilli for 5 years so maybe 3 plants was a bit over the top. I’d got two aubergine plants which seem to be the favourite food for whitefly. One plant failed to set any fruit and went to the compost but the remaining plant has suddenly 3 fruits developing now so gained a reprieve.

Preparing for a Holiday

Val’s been busy clearing the potted summer plants on the patio that are reaching the end. She’s being quite ruthless because we’re going on holiday next week and don’t want to leave the house sitter with too many things to water.

Cleared the patch in front of the pig sty shed, limed, rotavated and deeply mulched with grass clippings. The soil is lovely, once the rocks, bits of slate, pieces of a mirror and old bottles are removed. It was probably the midden at one time, which explains the soil quality.

The problem is that it is very shaded which rules out growing a lot of things, except weeds. I reckon a vigorous blackberry will do OK since one is trying to grow through the wall inside the shed.

Just as I was finishing rotavating the tiller jammed on a stone and died. Since then it won’t re-start. My neighbour reckons it’s thrown the flywheel out of sync and he knows how to fix it so it’s in a coma, not dead.

It’s such a shame that we didn’t get the weather earlier in the year. The nights are drawing in at an ever-faster rate and there’s not enough hours in the day to get everything done. At eight o’clock it’s darkening and by quarter past it’s pitch black night. By Friday evening our one-week summer was over, the wind picked up and the rain had started.

2 comments on “Our One Week Summer”

Leave a Comment Here on Our One Week Summer Cancel reply