At last a fine day! In fact it was far from fine, it was glorious. Bright blue sky, sunshine and crisp. The day that tells you winter is over and spring will turn into summer.

Shame that was it and the rain is back tomorrow. Oh well, we make the best of what we get and it was wonderful. My son-in-law had a surprise day off and offered his help on the plot, which was brilliant.

Our first job was to put in a new fence post to replace one that had rotted at the base bringing the fence down. It must be spring because the sheep are back in the field and, of course, with a gap in the fence, the plot is much more attractive than the field. I bravely held the post whilst he sledge hammered it in, feeling very like the boy with the apple on his head as William Tell took aim with the crossbow.

He then started clearing which is tougher than it sounds. Clearing the grass is one thing but he uncovered 4” thick roots coming from the old ash tree that had shaded half the plot before being turned into potash whilst heating the house.

Digging these out takes a lot of time, they lie about 8” below the surface coming out from the path. Much hacking away with the mattock to break them. This initial preparation may as well be done properly because it only has to be done once.

The rock he uncovered has defeated us for now. It’s about 3 feet long and a foot across but we don’t know how deep it goes. The top of the stone was just six inches under the surface. I know this used to be a veg plot some years back so I’m surprised it’s here.

It’s going to take some more digging around it to see if we can get a bar under it and lever it up, then move it. If not then we’ll try to break it. There are a number of techniques for breaking rocks; setting a hot fire next to it can crack it, drilling a hole and knocking in a wedge or just plain whacking it with a sledgehammer. My cunning plan is to ask my builder friend who will know the best way to handle our rock when I see him next. I’ll report his advice.

My job for the day was to create a border and plant out a number of bushes in it that Val’s been growing along in pots. It’s roughly 25 feet long and about 3 feet wide, running alongside a low wall.

The plan was very simple:

It was the first run for the Merry Tiller this year, so a good check over before starting. The belt guard had come loose, I’d probably knocked it, but that took but a minute to fix. Then a spray of WD40 over the moving parts at the engine end of the throttle. Add some fuel and off she went at the first pull. Bit smokey for ten seconds but she soon settled down.

This was where the plan went up the river. Some genius had decided in the past that this was the best place on the whole holding to dump some half bricks, pieces of slate and old lumps of concrete. 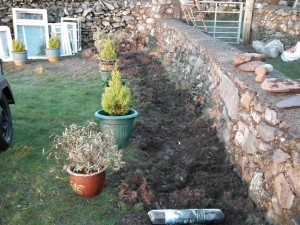 The tiller took them into her stride, kicking them up from below the surface but there were an awful lot of them. Four wheelbarrow loads to be precise. Each run would bounce and kick more up rubble that I picked and piled up in a dead corner. So a 2 hour job turned into near 4 hours. The annoying thing is that the rubble would have been really useful as hardcore when we put the shed base in. Still. I know where it is now if I need it.

By five o’clock Val had directed where each plant was to go, the pots with the bushes moved into order by the bed so I wouldn’t get confused and I was ready to plant but the temperature was falling fast. In the sunshine it was lovely and warm but as the sun sank it was back on with the fleece jacket.

Decided to call it day and pack up since I wouldn’t have time to get more than one planted out before dark and I was really feeling the chill. A job to continue on the next decent day.