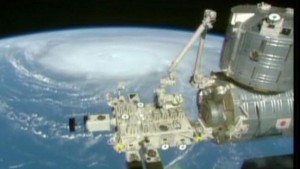 Hurricane Gonzalo from Space. I’d rather be watching it from up there than down here!

Having just managed to get the big shed back where it should be, the last thing I want is to have it move in the next storm. And one thing I’m certain of here is that there will be another storm sooner rather than later. So, time to stop it shifting.

The news that the remnants of hurricane Gonzalo are arriving with winds gusting up to 70mph pushed the task to the top of the list. Most people don’t need to worry about large heavy sheds blowing away but around here on the western edge and high up I’ve noticed most sheds are anchored in one way or another.

The most common method seems to be short lengths of angle iron sunk into concrete and fixed to the side of the shed although some go in for wire or straps over the top of the shed anchored to concrete blocks. The strap method does have the drawback that it can distort the roof and even the whole shed in a storm so I ruled that out.

Since my shed is sitting with the bearers on slabs sitting on concrete slabs the answer for me is to fix down through the bearers into the slabs. I got some 100mm fixing bolts from the builders merchants which are like a solid screw with a wide thread spiralling around the outside. You drill a 6mm hole and then screw them down, gripping into the concrete.

These will resist sideways movement and any tendency for the shed to lift up. I got half a dozen in OK but some wouldn’t go in all the way despite re-drilling the holes deeper and using a mains powered drill as a screwdriver gun. These were re-drilled to 8mm and had 100mm frame bolts inserted. They’re not as good for the lifting problem but will certainly resist sideways forces.

Incidentally, for drilling in concrete, brick or stone I totally recommend an SDS drill. A hammer drill is alright but the SDS drills concentrate the hammer action to the bit and whizzes into concrete like an ordinary drill with wood. They’re not cheap but they save a lot of time and effort.

Having secured the shed, double checked around for things like empty plant tubs which will fly away in a storm and stacked the plastic garden seats in a sheltered spot. I’ve learned to respect the wind here.

The new greenhouse is as secure as I can make it. I’m keeping my fingers crossed even so. I know it won’t lift off the base and it’s in the most sheltered spot I’ve got but there’s still a worry in the back of my head after losing the first one.

I’d planned on sowing some Aquadulce Claudia broad beans that I had in the cupboard. These were bought in France and have a sow by date of 2017 but I think the packet has got a little damp. When I opened it they smelt musty and looked as if there was a dusting of grey powder on them

Anyway, I ran a seed germination test and they’re no good. So not a bargain! It’s my fault, I should have looked after them better, storing in an air-tight tin instead of on the shelf. It’s an ill wind, as they say so I’ve ordered some fresh seeds but the dwarf variety, the Sutton instead.

The Sutton is not as productive as Aquadulce, giving less beans per pod and fewer pods but it is a better bet in windy areas and on that score we certainly qualify.