Escape to the Plot

I actually managed to get out today, I don’t care if it’s cold and there’s ice on standing water, I need a break. When I sent out my newsletter I said “I love my old gardening books with their advice that there is little to do in December. Of course there is, you do the jobs that should have been done in November.”

Sadly, in my case, this is the jobs that should have been done in October! Still I’ve made a start. I planned on getting around to the plot around lunchtime, but the phone went a few times and that slowed me down but finally I dressed up warm and collected everything for the compost bin and set off for the 100 yard walk to the allotment.

We don’t throw anything away that we can compost, tea bags, green waste, egg shells and shredded paper is all grist to the mill but it was building up a bit. Three carrier bags full and it was getting a little smelly.

I got around the corner and found my neighbours but one looking a bit perturbed at next door’s garage. They could hear a cat in there and were worried it was trapped. Well I know next door is away but I also know her well enough to know she wouldn’t mind me going into her garden so around to the garage’s back door.

The door’s a bit ropy, she’s gradually improving the house that had got into some disrepair and had fixed a big padlock to keep it shut, the old lock being defunct. I thought this is going to be a hacksaw job when we realised the cat wasn’t in the garage, he was on the roof of the garage.

Down he came, looking totally unbothered by the gathering crowd of would-be rescuers. Don’t you love them?

So pick up my carrier bags, then stop to explain why I’m walking around with three smelly bags of old vegetables starting to rot. At this point I can see they’re wondering if a call to the emergency psychiatrist is called for and if the voices are likely to tell me to kill them!

I finally get on to the site and the new occupants of a plot are busy getting it into order. The previous tenant had put in some raised beds and made a start but they’re re-organising it. Moving the beds and making them deeper then putting a path up the middle and using the ground on the other side.

They’re getting on well and it’s a sensible plan but I felt a twinge of sadness as the previous chap had died. He wasn’t very old, I think in his 40s, and had had his 10th child this year. He wasn’t a good plot holder, didn’t come down often enough but he’d arrive with a football teams worth of children and seemed to be a wonderful father.

None of us know what the future holds or when we’ll head off to the big garden in the sky. I just hope I leave the garden on Earth in better condition than I found it when I go.

After a chat with them I put the compost in the bin and headed for the shed. The globe artichokes were my target and I needed the shears. I should have done this before the cold weather set in, but as I said, catching up on October. Cut off the foliage, into the bin with it and then off to leaf mountain for six barrow loads.

With globe artichokes, it’s a good idea to cover them with something insulating for the winter and leaves are ideal. By now the sun was setting and you could really feel the temperature dropping so I headed for home before I got too chilled, despite being wrapped up warm. It’s near long-johns weather!

On the way to the shed, I noticed Andy’s pond he’s put in was pretty solid ice. In fact it’s a bit funny at this time of year, the places in shade still have frost where the sun hasn’t hit. One day earlier in the week looking through our front window it was a Christmas snow scene but the south facing garden at the back didn’t have a sign of it.

That’s a reminder to me, the crab apple at the back needs pruning badly so next fine day. In fact, having got the new book finished, I’m determined to get out as much as possible. The next book is coming much more easily, almost falling onto the page. All work and no play, as they say.

I took a few photographs on the plot, you can see them here in December Allotment Photographs but when I got home Val was putting up the Christmas decorations. We don’t normally go too mad with them and this year we’re really holding back because of the new lively young moggies. No big tree hung with baubles, just a little fibre optic thing from Wilkinsons.

Val did put one measly bit of tinsel up in the kitchen She fixed one end and the other came loose, dropped down and dangled in front of the mob who immediately captured it and tore off the end. So no apologies for yet another cat picture. The three kittens with their captured tinsel! 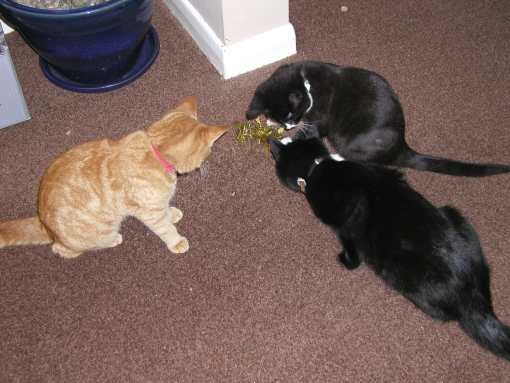 7 comments on “Escape to the Plot”

Leave a Comment Here on Escape to the Plot Cancel reply