When I wrote Vegetable Growing Month by Month, I really had no idea how it would be received. After all, I’ve had no formal gardening training and never taken a writing course either. I was pretty convinced the publisher would send a polite ‘no thank you’ back but, happy to say, I was wrong.

When it finally hit the shops, I had this fear people would be demanding their money back and threatening to compost me but I’m really happy to say I was wrong again.

So, what’s this milestone? Well, I’ve sold over a thousand copies off the website. Amazing for 6 months. I keep expecting it to stop, but so far, touch wood, the orders keep coming in.

Of course, sales don’t just go through my website. The online booksellers like Amazon, Play.com have them and they’re in the shops as well. It’s been in the Amazon top 100 for 3 months and twice it’s been the Play.com editor’s choice.

My publishers tell me I can’t reveal the actual sales figures and I’m just to say ‘it’s doing well’. So – it is doing very well. I think the reason is that it is honest. It’s great to quote theory and suggest the latest fad – there are fads in gardening, but don’t get me started on goji berries, you can enjoy strawberries, but them goji berries.. (6 page rant about TV gardeners deleted)

Honesty is important, if you don’t take the fact that sometimes the weather is against you or a plague of slugs / caterpillars / blight can ruin your efforts even if you’ve done everything right, then people blame themselves and give up.

In growing you need to keep positive and concentrate on your success. So this year, we’ll gloss over the onions and remember the garlic. We’ll forget the caterpillar munched cauliflowers and enjoy some of the best carrots I’ve ever grown.

Last year the climbing and French beans were a disaster. A few runners and about two meals worth of French beans was the lot. This year we’ve stocked the freezer with both and the Borlotti beans look about enough to fill a sack. Not bad.

Saturday on the Plot

Down to the plot for a gorgeous Saturday. The sun was bright but not scorching and I’d almost forgotten how lovely a blue sky is. I was amazed how few people were on the site, being such a day I thought it would be crowded out but for most of the time I was almost on my own.

The first thing I did notice was the chap who has taken over the late Alan’s plot was busy building paths and raised beds. It was hard to miss, as he’d come in a Massey Ferguson 365 tractor. Now I’m not too competitive. I don’t really care if your car is a Ferrari or a banger but rotovators are a different matter. How can my Merry Tiller compete with a hulking great tractor? Grrrr.

Anyway, seething with jealousy, I went over to plot 29 to carry on with the autumn tidy-up and harvest. The swedes were not bad, they’re actually a harder crop to grow than you might expect. Mine were reasonable size but the blessed caterpillars had struck, turning the leaves to ribs sticking out looking more like a succulent than a brassicas.

On the same bed, I’d a row of beetroot so they went into the bag. They’re quite nice looking but I don’t like beetroot so it’s hard to be too enthusiastic. Val like them though, so I grow them for her.

The small raised bed by the path was down to a few spring onions, so they came up as well and both beds were cleared of weeds.

I avoided the dreaded red ants and managed to get a few nettles into the green bag to shift to the bin without getting stung. Then I absent-mindedly put my hand in the bag and got really stung. I think I’ve got some super nettles, as my hand was still irritating when I went to bed!

Back over to the sweetcorn patch, where some of the plants still had small cobs on, which are now ready. This year I grew less plants but we’ve had 2 cobs at least of all of them and 3 or 4 off some. So much for not over-growing this year.

The strawberry barrel was next but a short break to give Paul some comfrey plants. I’d taken a cut of the comfrey to lay between the rows of Sarpo potatoes and provide some organic fertiliser. Amazingly some had rooted so they needed to come out quickly. Once established with really deep roots they are hard to get rid of, even with chemicals.

We also spent a few minutes playing ‘hunt the butterfly’ that had got into his netted brassicas. How do they do it? Then back to the strawberries. When I filled the barrel, I had enough plants for the sides but not the top. Some of the runners had set into the path so they were transplanted to the top and added a bit more of the compost/vermiculite/osmacote mix.. I also trimmed off all the runners that were there. Once established, each strawberry plant will make 3 or 4 plants a year, easily.

Sunday and next week look promising, what a shame we didn’t get the summer in summer. Still, make the most of it. 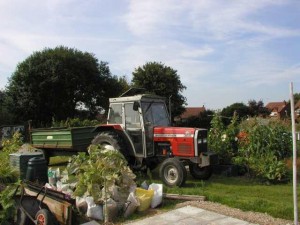