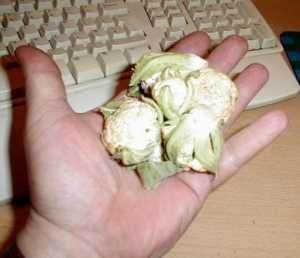 My Small Cauliflowers from last year

Monday wasn’t too bad so I finished off hoeing on plot 5. Just a few piles of weeds waiting to be transported to the compost heap now. Got some nice cauliflowers out for my trouble as well. I actually cut 4 if you can include one of my famous miniature cauliflowers. The other three weren’t large but fine to provide a meal each. When we had our talk at the NVS meeting last Tuesday evening and the speaker mentioned small cauliflowers, I was waiting for Larry to chip in with “Not as small as John’s!” but he restrained himself.

Anyway, my cauliflowers are exceptionally tasty, especially with cheese sauce, chips and bacon. Probably not the healthiest meal for the body but great for the soul.

Pulled a few nice carrots as well. I’ve a row of Carrot Senior (don’t think it’s still available) and just one was sufficient for a meal for the two of us.

Tuesday was wood delivery day and it was supposed to be delivered in the morning, which was quite sunny at points. I was ready for it at 8am and so he turned up at half past two when it was raining. Typical!

Had it unloaded on the site car park and then handballed it across to plot 5. He offered to take the wagon up to the plot but it was raining and wet so I didn’t want to churn up the side road.

It’s surprising how much difference the wood being wet makes to its weight. I could easily carry two or three lengths of it dry but just one wet length weighed more than three dry.

Having considered further the deep beds, I’ve changed the plan. The wood was most economical bought in 150mm 6″ widths so I had planned on two beds 300 mm 1′ high but looking around the site I think 150mm high will be quite sufficient so that halves the cost as well. The ideal would have been 200 mm 8″ but 150mm it is going to be.

I was hoping to make a start today, Wednesday, after a dental visit but, of course, it had to rain. We did pop down to the plot around 5pm with some pots of compost from the garden. Val’s busy cutting down flowers, moving things into the greenhouse and generally getting ready for winter now the cold weather is arriving. The compost that had annuals in may not have much nutrition left but the compost still helps add humus to the soil.

We brought some wood back with us from the plot so I can cut it down to size in the shed. It will save a fair bit of time being able to use the electric saw as well although I will still be hand sawing the planks at the plot.

We’ve got Brussels sprouts! I sowed two batches of sprouts and one of the earlier sowings has some ready now. Not a huge amount but enough for a couple of feeds. The later sowing should be ready to add the traditional windballs to the Christmas feast.

I had a joking email about my deep beds asking if the plan was to sail between the beds. I hope not!