Full Day on the Plot

It was far too good an opportunity to miss today. Wonderful sunshine, a real summer’s day.  The weatherman says not to get too excited, we’ll pay for it tomorrow with more torrential rain. Gathered the calabrese from the coldframe in the garden, filled a flask with iced tea and down to the plot at 1pm. We always pick up some iced tea syrup in France, never seen the syrup in the UK, which I can’t understand. I find it really refreshing on a hot day and today was hot. Sweat dripping off me until around 6pm when it cooled down.

I got straight down to things, planting the brassicas where the first earlies had been and giving them a hefty sprinkling of  fish, blood and bone to boost them now they’re out of their pots. There were four greyhound cabbages under the tent cloche so  they went in at the same time. I’ve two side frames with wire netting and some nylon netting, which I used to make them safe from the pigeons.

Whilst I was down there on plot 5, I cut off the haulm from the King Edwards. As you can see from the photo at the end, the blight has brought them down and by cutting off the haulm I hope to stop the spores from reaching the tubers. I’ll harvest whatever there is to harvest at the beginning of August.

The first and second earlies we spent so long washing and cleaning before storing have some blighted potatoes so we need to re-sort them. It only takes one to ruin the sackful. What a season! The water has made them grow well but the cost has been rot. Some years you just can’t win.

Back up at the top of the plot, a patch of onions was showing signs of rot setting in. Most were OK but about half a dozen had white mould underneath. Did a bit of re-organising in the small greenhouse and spread them out on the bench to dry. Goodness knows how I can dry out all the onions in this weather, there’s not enough space in the greenhouse and outside they’ll just rot the way things are going.

Planted out the rest of the Autumn Mammoth Verina leeks where the broad beans were on plot  29. Teasing the roots apart on the seedlings took longer than dibbing the holes and dropping them in. I should really have watered them in but I think the rain will do it for me. As I write this in the late evening, it’s lightly raining already.

The rest of the patch was planted with Musselburgh. This is a very hardy Scottish variety and I’ve always done well with them but the Verina have produced taller plants although they don’t hold as well.

I also planted about 36 on plot 5 where the broad beans were there. Splitting crops does offer some protection in case of disease etc. I had one large pot of leek seedlings over which I gave to Larry who’s a bit short of leeks.

Back in the greenhouses I fed and watered the tomatoes, planted out  the last of the lettuce that were in pots snipped off a few sideshoots that had magically appeared. It’s critical to feed tomatoes when they are making fruit for a decent crop. So far the plants in the greenhouse look good and the San Marzano in the large greenhouse is enormous. It’s flowering but no fruit yet. That’s more than I can say for the San Marzano outside on plot 5. They look as if they may have blight and are about a third of the size of the one in the greenhouse.

Harvested the last few carrots from the greenhouse border, that’s where the lettuce went in and got a few peas as well.

It being nearly 9pm I thought I’d done enough for one day and headed home. Must admit to feeling a little tired. Reading this over, it doesn’t sound a lot for a day but there you go. 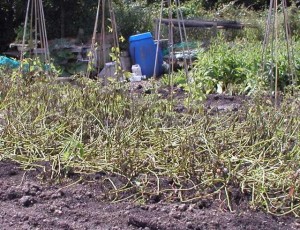