The day threatened rain with heavy skies until the afternoon so I headed down and harvested the rest of the early potatoes.

The rest of the Anya were not much better than the first plants, a fair quantity but really rather small. Very little slug damage, that’s the good news. Some had started to rot but they’re sitting in very wet soil.

I suppose if I had planted them higher and mounded more they would be better but in a dry season they’d have not done as well. Until the weathermen can accurately predict the forthcoming season, that’s going to be a problem

The Charlotte have done really well. From ten tubers I have gained nearly four carrier bags of excellent potatoes. Once again, no slug damage and I didn’t find one rotting although I managed to fork a few.

By about 8pm I’d got them cleared, bagged and loaded into the car and the haulm and a few weeds loaded onto the compost heap. Next job was to run the Mantis

over the patch, thoroughly mixing the soil and compost up and breaking the soil into a finer tilth.

Normally I would like to follow on with mustard as a green manure but I still haven’t got my leeks out. They’re going to be tricky as they’re in large pots and the roots will have intermingled. I’ll have to wash them apart before planting out. That assumes the weather will hold off enough for me to get them out.

It’s not really too much to ask for a sunny week in July to allow time to catch up with all that needs doing but Mother Nature seems to have other ideas. Still I’m better off than the people whose plots have been flooded completely. Their problem is far worse. Even the plants that have survived may be contaminated by sewerage as when things flood the drains back up. I’d be very cautious in that situation about what I ate from the plot for this season at least.

I had an email from someone asking me if I could identify the problem with their tomatoes. A picture being worth a thousand words enabled me to immediately identify it as blossom end rot. This happens when the tomato plant suffers a water shortage and it throws out the calcium in the plant. There’s no cure, just compost the fruit. 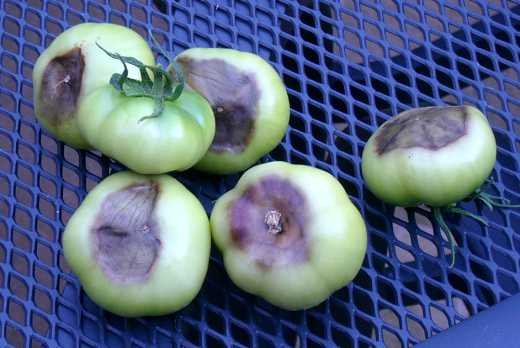