Judges on Site and Planting the Swamp

It was quite strange today, it wasn’t raining! After making sure I was awake and not dreaming, headed down to the plot armed with a flask of coffee after lunch.

Went down to the bottom of plot 5 where things were no better after the day before’s 2 1/2″ of rain. Dug another trench to see if it would help drainage but it didn’t seem to help much.  Then Larry arrived with a white pot which he labelled ‘Ladies’ and borrowed my new French watering can that was duly labelled ‘Gents’ The reason is that the site loses points in the allotment competition for not having a toilet so now we had two official loos – even if not for long!

Messrs Carver and Woods of the NVS arrived to judge the plots and site accompanied by Glyn from the council services department, a councillor  (sorry I didn’t catch your name) and a few other allotment reps. Larry spent most of the time telling anybody who would listen that his sweetcorn was more productive than mine and asking them to admire it. Unfortunately nobody had a magnifying glass to hand so they couldn’t spot his sweetcorn. I understand he’ll be getting a microscope kit to help him with the harvest.

The verdict of the judges on Jim’s plot was lack of nitrogen and they suggested sulphate of ammonia. I still think he has a phosphate shortage and would be better with a balanced fertiliser and if it was my plot I’d give it a feed with a liquid fertiliser containing trace elements as well. Can’t do any harm and might just rescue the situation.

Back on my own plot I’ve got my own problems, these are known as weeds. Popping out from the weeds I could see onions so cleared that bed. We really picked the wrong time to go away, the only good weather and the weeds went mad. They’ve grown about two feet in the month. The onions aren’t too bad considering they’ve been shaded for a couple of weeks.

Harvested a couple of plants of Arran Pilot first early potatoes. Really nice clean crop  and a good yield too.  I’ll be taking them as needed for the next couple of weeks since they’ve got more growth in them yet. 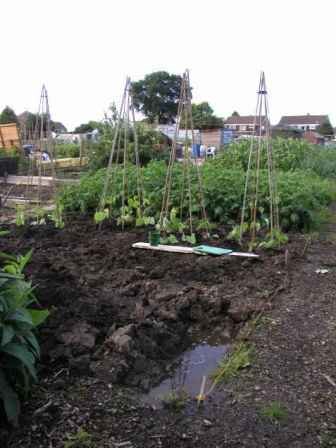 Decided that regardless of the condition of the waterlogged soil at the bottom of the plot it was either plant the climbing beans or forget them. Managed to erect four pole tipis and planted two tipis of  borlotti beans and two of runner beans. One of Streamline and one of Polestar.

Planting the beans took a while because I dug a deep hole for each plant  and filled it with the compost. The soil is that wet that the base of the hole was filling with water. I hope the compost will both provide nutrition and allow drainage. Don’t want them to drown.

I’d sown climbing French beans Blue Lake and Cobra but had only one plant of each actually germinate and grow. The seed is probably a bit old and in hindsight I should have germination tested it  before sowing. Basically that involves taking 10 or 20 seeds and chitting them to see what percentage  are going to grow. My Twiggy Kenya beans failed completely. Oh well, live and learn.

Planted these two beans by the sweetcorn, which will support them.

Finally planted out the squash and pumpkin. I’ve four squash plants and one pumpkin. Once again I dug a large hole and filled it with compost to plant in. Added some pelleted chicken manure to the compost, they’re greedy plants and will need a lot of nitrogen that chicken manure should provide.

I’ve a load of dwarf French beans in pots but they’re a bit leggy. Once again should have gone out when we were away. I may just try re-sowing for a late crop and recycle these into the compost bin.

Came to push the wheelbarrow back and the tyre had gone flat again. I think that confirms the tube has had it. Hope the one I ordered from Ebay arrives soon.