Cloches on Tomatoes, Cloches off Sweetcorn

Anyone who knows me will tell you I’m not a morning person. Like Dracula, I come to life at night but mornings are not my best time. Well the last couple of days I’ve had an upset tum. If you want to lose weight, let me cook for you. Guaranteed to help you lose weight,. This managed to keep me awake most of Tuesday night so Wednesday I was fit for nothing.

Val wanted to see her father so I said I’d go with her. Of course the law of sod struck and Shaun from the forums came over to see me. He managed to find the plot, probably looked at the aerial map of the plot , and Larry gave him the grand tour. He carefully pointed out every shortcoming on my plot, no doubt

Thursday I still didn’t feel too good so an early night, which brings us round to this morning. I actually sat down at the infernal machine at 7am. Even the cats looked shocked and didn’t start the breakfast hassle until 9am. The plan was to get off to the plot early but the aforementioned law of sod struck again and I didn’t get down there until 4pm.

Not least was a fruitless trip into town to try and buy a tin of Akee for our friend in France. Akee is a favourite fruit in the Caribbean where she spent a year and she’s not found it stocked in rural France. It appears our West Indian grocer has gone, which is a shame so we’ll be going empty handed. 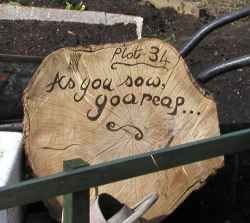 When I got to the plot I noticed a sign had appeared on plot 34. It’s getting very posh on the site nowadays. Must be something to do with them allowing the wimminfolk onto the site! One of the sheds even has net curtains.

It’s actually great to see people taking such pride in their plots. People who invest time and effort in their plot. You know someone who does that is not going to give up because the weeds grow.

The first job was to water the greenhouses. As a rule, I prefer too much water rather than too little. Things were not parched but I gave the borders a good drink. I picked up a  new rose for the watering can last week. It’s amazing the difference a fine brass rose makes when watering. Seedlings don’t  get flattened but everything gets a good drink all the same.

The carrots in the main greenhouse are doing really well. When we return I expect we’ll get a nice couple of meals from the thinnings.

The tomatoes seem to be doing well now, the yellowness has gone and they’re getting away well.

Cloche off the Sweetcorn

The sweetcorn and a row of peas were attempting to push the cloches off on their own so I thought it was time to take them off.  One plant had died for some reason but the rest look pretty good. I replaced it from 4 I’d still got in pots in the coldframe  and stuck the other 3 in at the end of the row.

Hoed away the weeds that had sprouted under the cloches and quite a few potatoes. Amazing how many potatoes get left after harvest no matter how you think you have them all.

It actually took about an hour to get the cloches off, folded and put away – you have to wonder where the time goes.

The next job sounds simple. Plant four tomatoes and cloche them. These are the Italian San Marzano I’m trying instead of our usual Plum Roma outdoor tomatoes. I’ve had them in the greenhouse in 8″ pots and they’re more than ready to plant out now.

I’ve had these barn cloche clips that hold the glass together so it should have been a two minute job to form large glass cloches to ensure the tomatoes get off well. No way – fiddling about, get one clip on and another comes off. Eventually I got the hang of it  and it was job done.

I watered the tomatoes in with some general purpose fertiliser just to get  the plants well established.  I’ll move onto tomato feed when they start setting fruit.

Final job was a bit of a drink for the sweetcorn to settle the soil where I’d hoed and probably re-root the blessed weeds. They were a little dry so it was needed. The brassicas got a sprinkling at the same time.

Then to home. The picture below is the tomatoes under the barn cloches.  To the right of them the sweetcorn are now out of cloche. In the foreground, the broad beans and behind the cloches you can make out the onions and behind them the potatoes. If the crop is as good as the top we’ll be selling them! 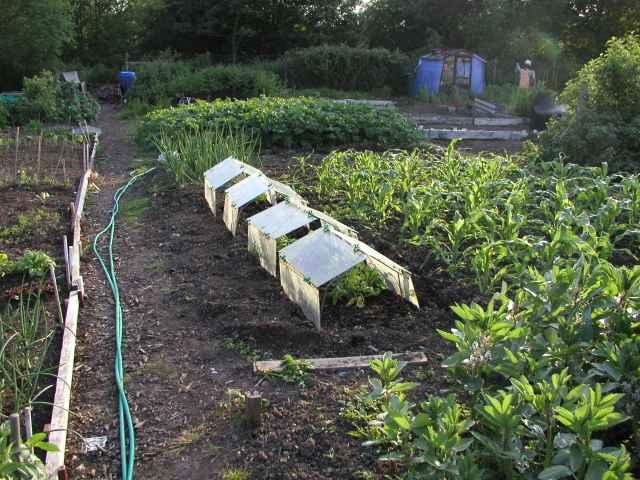 Leave a Comment Here on Cloches on Tomatoes, Cloches off Sweetcorn Cancel reply