Lanzarote – Growing in the Wind

We got back from Lanzarote on the 21st, just in time for the end of the world as predicted by the Mayan calendar but it seems the Mayans were wrong and the spaceship didn’t stop to beam up the faithful from France! We did manage to catch a rotten cold out there, which we’ve brought home. I think I prefer coughing in the sun to the rain. 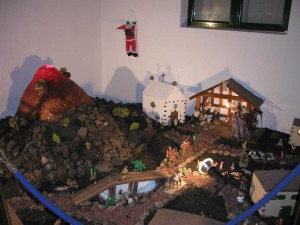 I have to say that Christmas in the sun seems very strange. The sounds of ‘Winter Wonderland’ on a radio as we lazed on a sunbed by the pool was surreal. Our hotel had a lovely nativity model which lit up at night. I must admit I don’t recall the volcano in the Christmas story but there you go!

One place we hadn’t seen on our previous holiday was the agricultural museum – Museo Agrícola El Patio – so we hired a car for a day and set out. Unfortunately the entrance off the car park isn’t easy to find and we wandered in the wrong gate.

I was looking around for someone to pay when a cross Spanish woman in costume arrived and was quite nasty about us coming in the wrong entrance. Well we paid our 5 euros each and followed the leaflet guide around the museum.

Half the exhibits were in darkness and there was next to nothing in the way of descriptive signs or information on the traditional methods of growing on the island. The only thing with a bit of life was the Bodega trying to sell expensive wine. Not somewhere I’d recommend visiting, although the cacti were worth admiring. 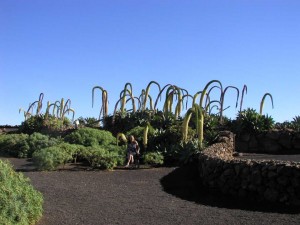 Little did she know the Triffids were creeping up!

There was one sort of cactus growing that reminded me of a triffid – those monster plants in John Wyndham’s apocalyptic novel, with there tall swaying stalk containing a sting that can kill a man as they slowly lumber about on their roots. OK, I’ve a vivid imagination but you must admit they look quite menacing, creeping up on an unsuspecting Val.

Growing in the Wind

Lanzarote, like the rest of the Canaries, is in the trade winds and their growing methods have to take this into account. Volcanic rock tends to produce a fertile soil but the constant wind has a drying effect as well as damaging plants, the last thing you want on an island where rain is rare.

It struck me that we have the same wind problem here although no shortage of rain and maybe I could learn a few tricks by looking at how they cope. The traditional method is to build low stone walls to shelter the plants or semi-circular barriers around vines.

Taller walls tend to have gaps like little windows in them to allow some wind through, I believe allowing some wind through reduces turbulence. Of course, building stone walls takes skill and time and is hardly economical these days. Some enterprising smallholders had produced windbreaks made from pallets. It seems you can’t get away from pallets wherever you go in the world. 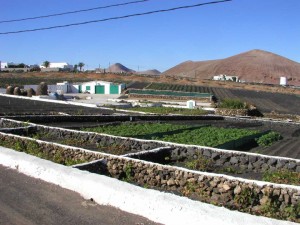 The modern method to produce a windbreak is with netting. You have to buy the material and fix it to posts all of which cost money but far easier and quicker than building stone walls.

I know the benefit of growing brassicas under netting from my experience with the Wonderwall tunnel. Not just because it kept the butterflies out but because the reduced wind micro-climate was good for them. On of the prime causes of poor sprouts and other leafy brassicas is wind-rock breaking the root hairs and stopping the plants taking up the high level of nutrients they require. Slowing the wind helps prevent wind-rock.

When we got home we found the strong winds had ripped the doors off the greenhouse, smashing one of the panes of glass. It’s a tough greenhouse, but we do get exceptional conditions here. Gusts approaching 100 mph are not that unusual. Our house sitter had put the doors back on but it’s getting expensive replacing toughened glass.

The answer is pretty obvious, wind breaks. I’ll be installing 2M high windbreaks around the greenhouse and some 1M to the windy side of the raised beds. Actually I may have 4′ above soil posts and fix from the top down.

The fact is that it will take years for trees and hedges to grow, providing natural windbreaks, so I’m going to have to invest to get some decent crops in the meantime. That’s assuming we get some summer next year! Just heard on the radio that 2012 was the wettest year on record.