Why Grow Your Own?

Sunday being a bit rainy and having had a few days off was spent playing catch up with work and Monday, as Mondays usually are, was a rush around day. But Tuesday afternoon the sun came out. For those reading this in the south east, here in the north west sunshine is not normal and has to be taken advantage of!

Why Grow Your Own?

When you have a year like this, hardly a summer, blight hitting the potatoes, slugs eating the seedlings, caterpil 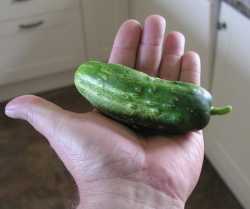 lars and pigeons eating the survivors.. well you do begin to wonder if it’s worth it.

OK, I can say it saves money, it’s greener, I know the provenance of what I grow and it gives great me satisfaction to eat a meal I’ve grown myself. But, I think this cucumber really sums up home growing.

As you can see from the photo, it’s about 4″ long, uneven shaped, blotched green and yellow and has little prickles. Hardly a thing of beauty! Can you imagine seeing this on the shelf in Tesco? I doubt most people would even recognise it as a cucumber.

Watering in the Greenhouse

First job was watering in the greenhouse. Someone sent me an email recently asking when they should water and how much. Pretty hard to reply to that without sounding facetious. When they need it.. when they’re starting to dry out.. before they wilt? As for how much water, well it depends on how hot and sunny, how much leaf area the plants have and what reserves of water there are to draw on.

I guess some questions just can’t be answered and we have to fall back on that rare thing – common sense.

I’d constructed the sides for my compost bins down by the house which gave me a little problem They’re a bit awkward to carry and weigh a fair bit. So out with my trusty sack truck and they were dragged uphill to their position.

I’d intended to start building them but managed to twist my back and the sciatica came on with a vengeance. My left heel felt on fire and literally a pain in the bum. So the construction is deferred.

In the evening I had a bonfire and got rid of some of the trimmings from the very, very overgrown hawthorns. It was still burning when I headed in around half past nine so I went out to check all was well just after 11pm. Fires are great fun, brings out the caveman in me, but you need to make sure they don’t get out of control.

It’s a pretty dark night so I took my torch. Wherever I pointed it on the ground were slugs. Masses of them. Long glistening black ones, huge brown ones and those smaller pale ones. It was a bit unnerving, snakes on a plane stuff but with an additional yuck factor.

You know those zombie films where the survivors turn a corner and there’s hundreds of them? Or that Arachnophobia film with the spiders? Well I felt like that – millions of the devils.

Leave a Comment Here on Why Grow Your Own? Cancel reply