It’s been a while since my last entry. The rest of the UK may have suffered with snow and ice but we’ve been lucky here in the west. It’s been pretty cold, hovering around freezing, but none of the minus tens that inland areas shivered in and no snow, either except on the mountain tops. 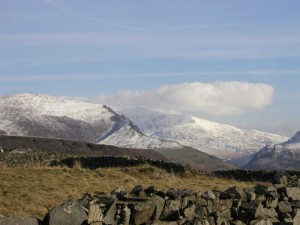 I thought I’d make a start on building my greenhouse which has sat in the box for too long but fiddling with nuts and bolts is something you can’t do in gloves. So hopefully we’ll have some warmer weather soon and can get it up.

At the back of the house we’ve a path bordered by a slate retaining wall and then a raised border to the stone wall. Over the years the slates had started lean and so we decided to repair this before planting it.

First of all the border was dug out in a trench to allow access to the slates. These were levelled and straightened. The gap between the concrete path and the slates was filled with concrete and some concrete set into the base of the trench on the other side to hold them rigid. Extra pieces of slate were used to cover the joints.

Because of the cold, the concrete was covered with plastic sheeting to stop it freezing before it went off. Once set the trench is backfilled, putting the loose stones at the base to assist with drainage, it’s a matter of planting up using shade tolerant bushes.

It’s still fairly common in this area to see fences made of slates set upright in the ground as well as dry stone walls. Sometimes you wonder if the walls actually serve much purpose apart from being something to do with all those rocks removed from the fields. 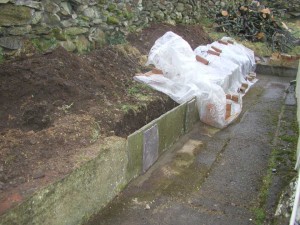 Slates, being a lot lighter, are easier to make a low wall with and often seem to have been providing shelter for seedlings growing into a hedge. Once established they’re redundant but it’s getting a hedge established that’s the hard work. Not just thin, poor soil but strong winds make getting anything started difficult.

Nowadays with the virtual demise of the slate industry, they’re not so easy to get hold of and the price is prohibitive. It’s a reflection of how economics have changed, natural and available materials like slate and stone used to be all that was available and labour was cheap. No longer.

As you can see from the photo, once it’s all tidy I’ll need to clean up the path. I’ll probably jet wash the slates, which are rather beautiful of themselves.

I’ve been up and down to the orchard a fair bit clearing the logs and brushwood. The only problem is the path has now become a mud slide so access is getting very difficult in the wet. The answer is to put a path in which is going to be quite a job.

Leave a Comment Here on Snow, what snow? Cancel reply