We’ve got quite a few trees around us here which haven’t been touched for donkey’s years. Now a lot of people, including me until recently, don’t realise that trees need some managing. If you just leave them to grow then they get bigger and bigger until one day a storm comes along and fells them. 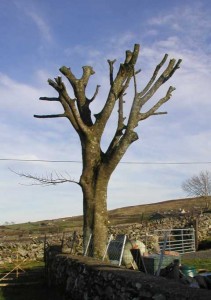 Not all trees are the same, some have a longer life than others and some are more flexible and able to cope with strong winds etc. That’s where knowledge and training come in. What to cut and when, what not to touch etc.

Our big sycamore had a smaller one growing beside it and was overhanging an LPG tank, the telephone lines as well as shading the greenhouse to the west. It might have been fine for another 5 years or another stormy or snowy winter could have caused a disaster later this year.

In effect it’s had a severe pruning. It’s still a large tree but reduced down to the larger boughs. Over the next year or two, it will grow more branches but they’ll be on very solid foundations.

The smaller tree, probably self-seeded, that was growing beside it served to shade the main tree and they were both quite lopsided. It, the smaller tree, was also beginning to cause a wall to collapse so that’s come out altogether.

We made a start on this last month but climbing a tree in rain and wind is not very safe so it only got finished on Thursday and Friday. The amount of wood that just trimming a big tree produces is surprising. 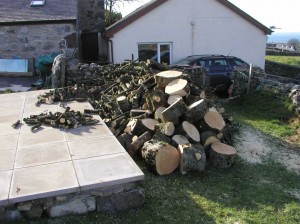 A load of logs from the sycamore

I’m pretty sure this one job will leave us self-sufficient in wood fuel for next winter. And there’s more to done.  I can’t help feeling like a bit of a vandal but we’re planting more trees (a lot more!) and this is just like hedge trimming on a grand scale.

Getting the branches down that were overhanging the LPG tank and phone lines was scary. A rope was tied around them and, as they were cut through with the chainsaw, my job was to pull like mad. Luckily we didn’t have a massive explosion or cut off the neighbour’s phone.

My new greenhouse arrived on Thursday whilst all this was going on. We get quite a few deliveries here and the delivery men vary to say the least. Despite a huge removal van moving us in getting up the track, I’ve had men in a transit van saying it was impossible and leaving their delivery at the bottom. 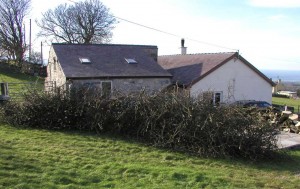 The chap from Vitavia deserves a special mention. Not only did he zip up the track, he drove onto the field and, realising we were somewhat occupied with ropes and a chap up a tree,  proceeded to unload it. More than that, he carefully stacked the glass correctly and explained a couple of things that people get confused on when erecting.

Because he realised our location can be a bit windy, he even gave me an extra bag of glass clips. That’s what I call a nice firm to deal with. The greenhouse was supplied by Greenhouse Stores– and they’ve been very helpful as well. Not just taking my order but giving good advice on what to buy. They’ve a huge range and it’s a bit daunting knowing what make and model to get.

Friday the tree surgeon was back, basically tidying up the cut branches and cutting down the small tree, but we weren’t around. We went over to Leeds for the day to our daughter’s. She’s expecting a baby in April and, thanks to the wonders of modern technology, we know ‘it’ is going to be ‘he’. Yep, a grandson for us.