The greenhouse base is coming along now. Thank goodness for this wonderful weather we’re enjoying. We have a couple of problems here that need to be considered.

Firstly, the wind. Being 213M high with an open aspect to the coast and sea, the winds really get strong. So I decided to put the greenhouse where it will be somewhat sheltered by the existing buildings but not too badly shaded.

This won’t be too far from a waterproof, RCB protected outside socket so running an extension out to the house to run propagators if I want. The house itself has large toughened glass windows which are more wind-resistant than ordinary horticultural glass. They’re also safer when there are children around but that’s not really a factor for us .. yet. We’re expecting to become grandparents next April!

You can see the greenhouse we’re getting here: Greenhouse Stores – it’s the Vitavia 14×8 with double doors, extra height to the eaves and bundled with vents and accessories etc. More in my diary here: Choosing a Greenhouse

The other problem for us is that the land slopes. Even the part that looks fairly level actually drops over a foot on a ten foot width. So we’ve dug it out to create a level base. On the lower side we’re building up a retaining wall using the rocks we have in abundance and then we’ll fill with rubble and slate waste, topping off with slabs.

This will give us a level paved area to pop the greenhouse on. The stripped turf and topsoil won’t be wasted, that’s going to go into raised beds, so it’s been barrowed up the hillside to be near where the beds are going.

I’d have loved to do this all myself, but with my knee problem I’ve contracted a local chap to do the heavy work. If I wait until my knee is 100% it could be next year before I get it done and we’ll miss another season. 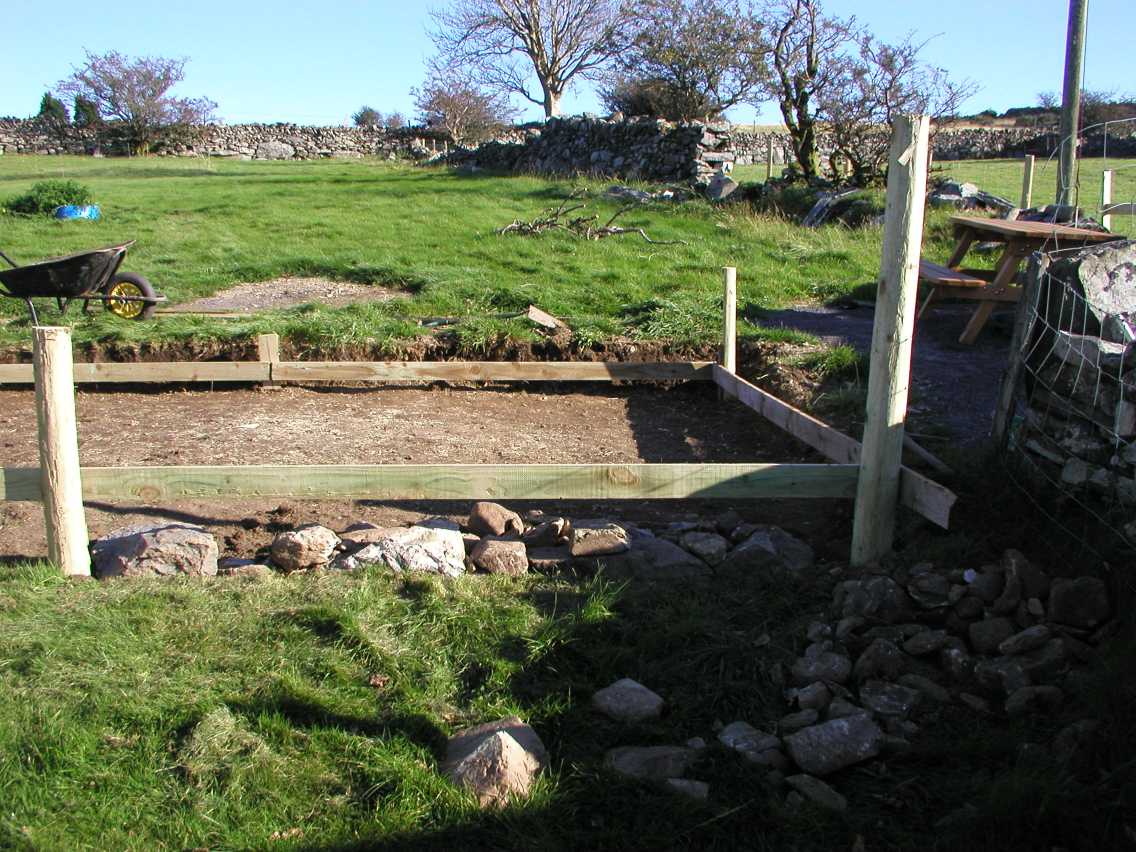 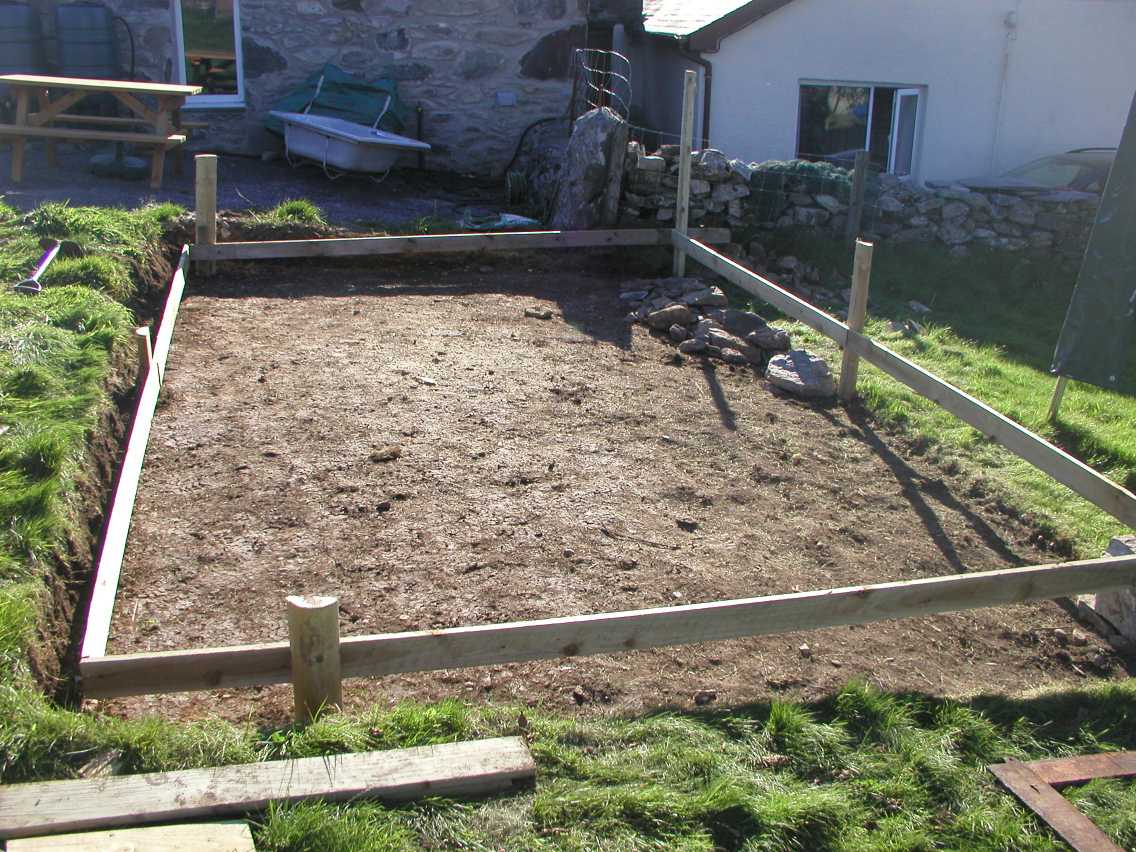 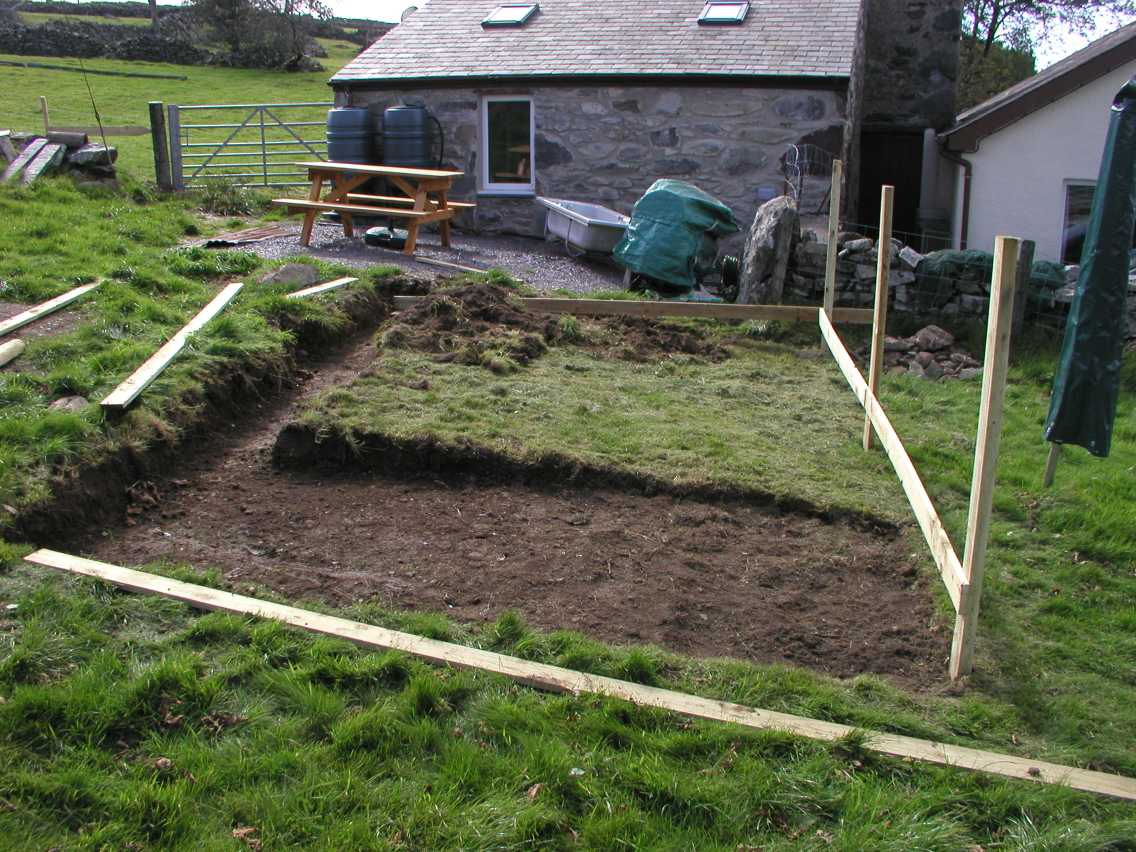 Finding Levels for Greenhouse Base

I had this question (edited slightly) about onions from Brian Woodward:

” I bought the essential allotment guide a while back and I’ve been very pleased with it, but I have a question. Due to an enforced absence most of my onions haven’t grown much at all. What do you think of taking them out, drying them and then putting them back in next year?
Worth it or not?”

My feeling is that it would be false economy. I think the easiest way is to buy heat treated onion sets which are unlikely to bolt next season. You may well get re-growth from the small onions next year but they’re going to shoot for seed (bolt) rather than bulb up.

Whilst I prefer onions from seed, they cost less, you get a larger choice and bolting is rarely a problem; onion sets are far more forgiving for the beginner or time–poor grower.

2 comments on “Greenhouse Base & Onions”

Leave a Comment Here on Greenhouse Base & Onions Cancel reply