It was nice to get an email from Claire Hart of Grassroots PR the other day following the 100th Harrogate Flower Show. Claire supplies PR services to a number of horticultural companies so gets paid to visit the shows! It’s a hard world…

A Man Who Really Knows His Onions! 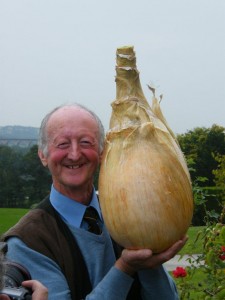 Pensioner Peter Glazebrook from Newark, added to his other three current world records on Friday, at the 100th Harrogate Flower Show. His world record breaking onion weighing in at an impressive 17lbs 15 and a half oz, beat the previous record, held by John Sifford of the West Midlands by over 1lb 7 oz!

Peter is no stranger to world Records, having held a total of ten during his 30 years of gardening. He currently also holds the world record for the heaviest potato (won at the National Gardening Show in Shepton Mallet at the beginning of Sept), plus the heaviest parsnip, and longest beetroot.

But it is the heaviest onion record that Peter has been striving to get for the last 25 years! He explained that he invested a lot more time and effort into it this year.

“I have dedicated myself to getting this record. The seed was planted on Nov 12th and kept in a heated and vented polytunnel. This year I use 150 litre pots , instead of raised beds, filled with John Innes number 3 compost.

I focussed on just growing 10 instead of the usual 50. My watering was also more scientific and measured this year”

He and his wife Mary drove through the night from Newark to Harrogate, arriving at 4am, to ensure the onion was harvested as late as possible and did not lose any weight overnight! 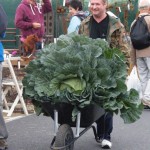 Peter was very proud of his win and says it is for the prestige of winning not any financial gain, despite the costs of cultivation! “I will use the onion for seed stock, he added  “but I doubt I can improve on this. I will need another secret!”

Also shown  is Derek Newman from Sheffield with his giant Cabbage in a barrow.