Thursday was absolutely beautiful, the sky was blue with just some white fluffy clouds to set it off. The sunshine was warm, but not that hot that it made you want to hide in the shade. A perfect day, especially after the disappointment that was August. 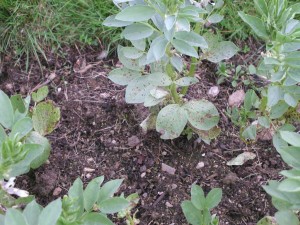 So the first thing I realised was that my broad beans have gone under to chocolate spot. Now I know they went in very late, but broad beans are my favourite vegetable so I was hoping for small crop at least. Sadly, this doesn’t seem likely now.

Chocolate spot is the name for a fungal disease, a bit like potato blight, that broad beans can suffer from. For the disease to take hold and thrive it needs humid conditions and we’ve certainly had those.

Even with humid conditions, most often the beans get away with it and it’s at worst a minor problem. However, if the beans are weakened due to lack of potash, it’s a killer.

From my soil testing, I now know the soil is not just stony but terribly deficient in the basic nutrients. Including potash. It’s too late to bung more fertiliser on, the weakened plants have succumbed so it looks like no broad beans this year for us.

The best natural source of potash is wood ash. We’d had some hawthorn trees cut back as they were in the way when the field was fenced off. Now hawthorn actually burns well and hot but isn’t the sort of tree you grow for firewood because of its curling and twisting when growing. Still, the thicker branches will go on the woodstove and the thinner went in the incinerator. The ashes will add potash to the beds.

The good news is the carrots in half barrels are doing very well and need a good thinning. The thinnings are just big enough to eat now. I’m pretty sure the early potatoes are ready now but before I harvested them, I decided to strim off some long grass up by the house.

The strimmer was doing well, I’m really getting the hang of using it now, when all of a sudden my knee went. I twisted slightly and then was struck with what I can best describe as a white flash of pain.

The knee has been bothering me for a while since I shifted some heavy slate but I figured it was just a muscle strain and would pass. I’ve found the best cure for my sciatica is gentle exercise so I thought it would be the same for my knee. In actual fact it turns out I was totally wrong.

Val was off shopping so I was alone in the garden, only about 20 yards from the house but unable to stand on my right leg. I don’t mind saying, it was actually a bit scary. For ten minutes I couldn’t even crawl, just bending the knee slightly was agony.

Eventually it eased off and using the strimmer as a crutch I managed to get back to the house and a chair. I rang my GP surgery in the morning who said I would probably need an x-ray so best to go up to A&E.

As always, it takes hours to get seen but in fairness they triage so urgent cases go first and limping is hardly life threatening. The doctor looked far too young to be qualified (that’s my age!) but she really knew her stuff.

She went through a series of manipulations and ruled out muscle or ligament problems before sending me for an x-ray. On the note for them she’d written ‘septic arthritis?’ which really put the wind up me.

On reviewing the x-ray, the news is that my joints are good and clean so not arthritis. I’ve damaged the cartilage but not so badly as to require an operation. If I rest it up for at least a few weeks, perhaps a month, it will be OK (fingers crossed).

If I try and work through the aches then it’s just going to get worse and I could end up with the leg in plaster. So no gardening for me or at least no serious work like digging for a month. It’s very frustrating but I don’t seem to have a choice.