Another glorious summer’s day in October so down to the plot for the afternoon. It’s nice to have some sunny days but why couldn’t they have come in summer? I know, climate change.

First job was to take the photo of the raised bed I’d finished yesterday (bottom of this post) and my decking (see this months allotment photos) If it’s good enough for garden makeover programs then it’s good enough for me. The price was right as well, nothing. Rescued from being broken up and skipped it’s a welcome firm base for my bench so I can sit, as Larry said, “Like King Tut on his throne”

Next it was compost moving time. The first couple of barrow loads went into the small greenhouse on plot 29 to build up the border. Managed to whack my thumb which didn’t half bleed and is still stinging now. Even small cuts on fingers always seem to sting out of all proportion.

Not a bad result even if these weren’t up to the standard of the previous batch from here. I’m so impressed that I’m planning on expanding the carrots in half barrels next year so I cut the bottomless barrel in the photo of my decking (see allotment photographs)  in half and then place them between the Brussels sprouts and leeks on plot 5.

These took another six barrow loads of compost to fill, once again mounded to allow for settling over winter and a barrow load over the base of the Brussels sprouts. A bit more hoeing and a few more barrow loads on plot 5 and I’d had enough. When the back says finish it’s time to leave the allotment so it was home for a well deserved cup of tea and a sandwich.

Tomorrow heavy rain is promised so I’ll be indoors in the dry. Not too bad though, they reckon the rest of the week will be nice. 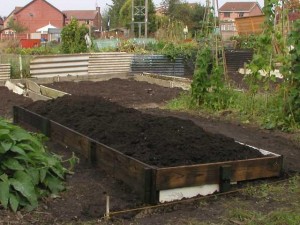