Dropped down to the plot in the afternoon and started by moving some compost onto the deep beds and around the leeks on plot 29. 8 barrow loads down just 292 or so to go!

I was looking at some cabbages on another plot grown in just the compost. I must say the results were impressive so feeling enthused I trotted on down plot 5 to where the deep bed is going and took one look at the weeds that have grown in the last week and trotted back up the plot.

The sky was looking pretty threatening so I didn’t want to start any large jobs but Val had asked me to bring a few carrots back with me. The half blue barrel on plot 29 had been sown with Osiris which were a free gift from the National Vegetable Society and Healthmaster from Thomson & Morgan.

T&M say about Healthmaster carrots “A revolutionary carrot that actually provides 33-35% more beta carotene value to your diet than any other carrot! The deep reddish-orange colour is uniform throughout the 10in long roots, which show remarkable resistance to growth cracks and internal greening – amazing in such a large variety!”

Now this year has been more moaning than crowing but I must admit these carrots are definitely in the crowing class. Especially considering I didn’t do too much beyond sowing them into a compost and sand mix with some fish blood and bone fertiliser in the blue half barrel. Thereafter they had to fend for themselves.

I didn’t even thin them out so harvest consisted of picking the largest and carefully wiggling them out leaving the rest to grow on. Since we’re fast heading to the end of the growing season I gave the rest a watering with comfrey tea to push them along.

There’s no sign of damage, no forking or odd shapes although a couple of Osiris were a little wiggly. They just look great. The flavour is good, which is really important. The Healthmaster do seem to tend to being larger.

I’ve heard that carrots were originally a white colour but Dutch breeders developed the orange colour we know today to celebrate the House of Orange. The deep purple of Healthmaster may be unusual but I bet it’s not as revolutionary as orange carrots were when they first came out. You can also get yellow carrots now as well – in fact T&M sell a  Healthy Carrot Collection which I may well go for next year that has yellow, purple and orange carrots in.

I washed the carrots and popped them onto the worktop in the kitchen to preserve for posterity in the photograph below. No sprays or special measures particularly and this is the result. The Healthmaster are in the centre with Osiris on the outside. 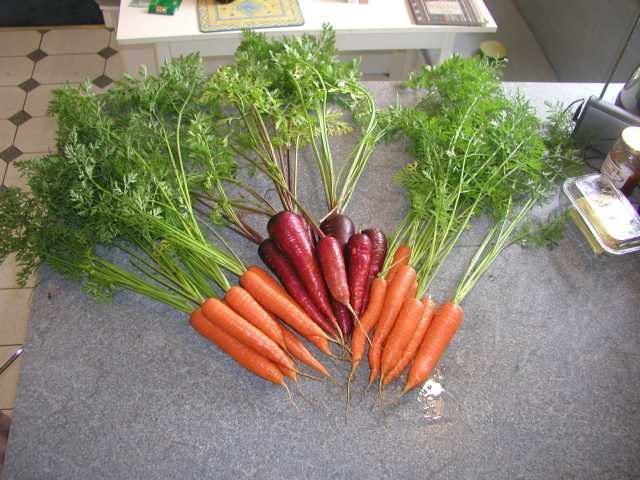