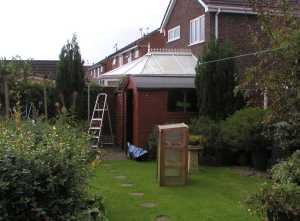 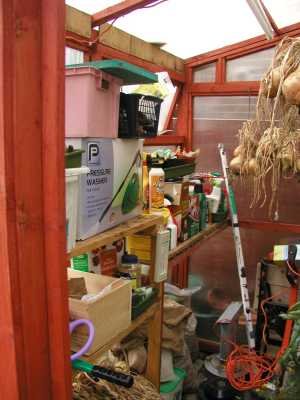 Shed Stuff in the Greenhouse 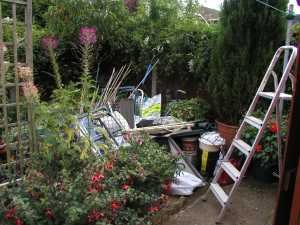 Shed contents on the lawn

It’s been a busy old week for me, so now to catch up with my diary, I did manage to get down to the plot and finish creosoting the planks for the new raised beds and to keep up with the greenhouse watering but that’s about it for the plot.

I could do with a good couple of days down there but we had a phone call that our new shed was going to be delivered on Thursday.

At the bottom of our garden we had an 8′ x 6′ shed with a sort of lean-to shed on the side that the people before kept guinea pigs in. Strangely both sheds were carpeted, which we left in place. The lean-to was collapsing at the rear and the roof was leaking. The main shed was in better order but the floor was rotting and the side was rotting as well.

We considered trying to repair the main shed but the whole base was going and we couldn’t figure what to put on the side in place of the lean-to, which had a very low roof anyway.

Then we thought about buying two 8′ x 6′ sheds and putting them side by side but that didn’t really work as the pitched roofs would meet together and the rain would be falling down between them, which would cause them to rot.

So we bit the bullet and went to a local firm and ordered a 9′ x 12′ shed The price was just a little more than that of two 8′ x 6′ sheds from a DIY centre but the quality is superb. Tongue and groove flooring on 2″ by 2″ bearers and a T&G roof as well.

Better still, the price included erection and with my building skills, that’s a real bonus. If I’d built the pyramids, they would have fallen down about 1,000 BC.

So Tuesday I thought I’d best make a start so I tidied up the greenhouse and moved everything that we didn’t want to get wet into there. Boy, do we have some junk.

Wednesday arrived and most of the rest of the shed was moved out into the garden. By this time I realised I’d made a mistake, the sheds had obviously got the storage capacity of a small aircraft hanger and were, like Dr Who’s TARDIS, larger on the inside than out. Luckily there were no left over Cybermen or Daleks hanging around in the dark corners but there were huge numbers of Alzarian spiders. (Note the obscure reference to the Dr Who episode Full Circle)

Now that wouldn’t be so bad except for the fact that I’m phobic about spiders. I don’t mind rats, snakes, ants or suchlike but given the choice of ferrets down my trousers or holding a spider, I’ll be sweetly saying “Nice ferret, be gentle”.

Having moved most of the stuff out, the next job was to disconnect the electrics, take the shelves down etc. and pop them safely away for the new shed.

I didn’t want to take the sheds down before Thursday as they form a boundary and there’s no fence behind them. Although two of our cats are streetwise, the newest one has never been out of the garden. He’d never even been out of the house in his eight years of life before coming to us, so streetwise he is not. I’ve no idea how he’d react to a car on the road. Probably stand and hiss at it, daft beast.

Well the demolition took far longer than expected, especially since the lean-to was falling down. Eventually I got demolished and the main shed dissembled. Some parts of the main shed will become shelves in the new one and some will have another life as new compost bins. The really rotten parts will be burnt.

The sheds did manage top have their revenge, I stepped on a nail that went into my big toe, straight through my trainers. Left me hopping mad (sorry, couldn’t resist that one). Lucky for me, my tetanus is up to date so having washed my toe and covered it in antiseptic there is a fair chance I’ll live to carry on for a while longer.

Larry had agreed to come and give a hand when the shed arrived at 6pm and my neighbour whose garden it was coming in via was about so we had the manpower. The shed chap came with his wife who’s a dab hand with the hammer and nails. We duly humped the parts in and laid the base down on bricks to give an airspace under the shed. Apparently allowing a good airflow underneath prevents rot and the reason the main shed’s base had rotted was lack of airflow under and the carpet on top holding in damp.

Once the base was levelled, the sides went up joined by coach bolts and nails which just left the roof. This was in two sections, each 12 feet long so they weighed a ton but we managed to heave them up and then the shed chap was on the roof fixing the ridge etc. I wouldn’t like to stand on the cheap chipboard type roofs, but this shed should survive a small nuclear weapon.

Friday saw me arise feeling about 104 years old and stiff as a board. A couple of ibuprofen with my morning tea and a hot shower restored some mobility so the outside got two good coats of Cuprinol. It’s there total care stuff, guaranteed to keep its colour (red cedar) for five years. Although the exterior had been treated, we wanted to match the colour in and give the shed as long a life as possible. I noticed the DIY cathedrals are all trying to flog paint sprayers but we had an old paintbrush, seemed to do the job even if it takes a little longer.

The total care stuff doesn’t seem to sink into the wood like the normal Cuprinol, so the inside of the walls and the floor will get treated with that. I know it’s a lot of fuss, not to mention a fair bit of cost, but I want this shed to last.

Managed to make a start on the inside but the light was going so tomorrow’s job will be to finish treating the inside, paying special attention to the floor and to get the electrics back in.

We’re going to fit up a dividing partition so the potatoes will be in a dark spot and I may pop some vents in as well to help with temperature control. The ideal temperature for storing potatoes is 5 degrees and you certainly don’t want them to freeze. Controllable vents will help and I can, if we get really cold weather, heat the small storage area.

You can make a small electric heater to just keep the frost away by fixing a light bulb in an old tin with holes in it. 100 watts is usually fine and enough to just keep things above freezing.

I’m also going to fix an outside weatherproof socket via an RCD so I can plug in the lawn mower without running a cable through the shed. Smart stuff!

In case you haven’t guessed, I’m rather pleased with our new super shed!

Our New Shed Outside Painted 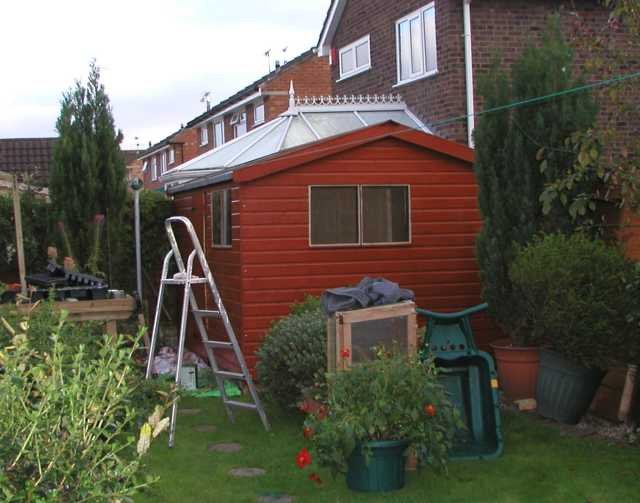