Potato Varieties Stored for the Future

One of the reasons the Irish Potato Famine was so devastating was that they only grew one variety, which was particularly susceptible to blight. Nowadays we are fortunate to have access to many different varieties, hundreds in fact, some of which are resistant to the disease.

However blight, like the flu, can mutate and who knows for how long our blight resistant varieties will be immune to the problem? Or, for that matter, when a new disease might appear that destroys the most important non-cereal crop in the world?

The only real hope in those circumstances may be to find a variety that has the right gene to resist the disease. But what if not one of the hundreds we have here now can’t help? Then we are up the proverbial creek without a paddle.

The potato is a south American crop originally from the Andes region of Peru and there they have around 4,000 varieties. Ten times the chance of finding a solution to a new variety of blight or a new disease.

Just as in the UK, older varieties can be lost as newer, more productive cultivars displace them. So we might find in ten or fifty years time that the magic bullet gene has been lost.

The same scenario applies to other plants as well – from chilli peppers to the cabbage family. So it’s good to know that there is a huge long term storage facility up in the artic circle where different varieties of seeds and plants are safely stored for posterity against anything from a disease to a global environmental catastrophe. 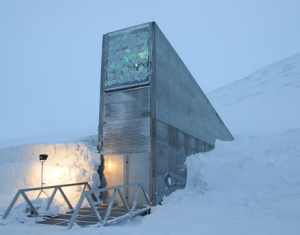 This seed vault, the Svalbard Global Seed Vault located on the Norwegian island of Spitsbergen in the arctic circle (nice and cold) opened in 2008 with an initial stock of 100 million seeds from 100 different countries, is a fantastic insurance policy for us. Seeing it extended to the important potato crop means we insure our staple vegetable.

Initially it is intended to send 1,500 varieties from the Cusco Potato Park in Peru. The Potato Park was established by six indigenous communities to protect biodiversity and ensure food security for communities in the region.

The varieties at the Park include every imaginable shape, size and color—ranging from white to black through red, yellow and purple. Some have particular nutritional or food values—like the red moro boli, which is high in antioxidants, or the long, banana-shaped ttalaco, appropriate for distillation.

This is actually a three year project. The first year will involve training conservation farmers in pollination techniques to produce botanical potato seed. This seed will be dried and cleaned, then packaged in foil packages to preserve in medium andlong-term cold storage conditions.

Three sets of the seed will be produced. One set will be used by the Potato Park to develop climate-ready varieties of the native potatoes, which are increasingly threatened by rapid changes in weather patterns. The second set will be stored at the CIP genebank in Lima, and the third will be shipped and stored in the Seed Vault.

Further information on the vault is available on the Norwegian website (in English) here.

3 comments on “Potato Varieties Stored for the Future”