We’re finally getting some order out of chaos in our place. There’s still a load to do but at least we most of the boxes are emptied now. The renovation works are proving that golden rule of construction though, everything costs more and takes longer than you plan on!

I’d planned on making a start on the vegetable plots by now, but I’m rather glad I haven’t in hindsight. The spot we’d picked out for them is right but I’ve realised we’re going to have to consider the winds we get more than I had.

We’re about 5 miles from the sea here and 200 metres high with a clear path across to Ireland which means that westerly winds howl in unimpeded. Twice now we’ve had the rain coming in horizontally!

So I’m going to have to think carefully about windbreaks for the vegetable beds. It’s not just that they’ll blow over – or even away – it’s the effect on temperature. Not an insurmountable problem but one I’ll have to address to get the best results. 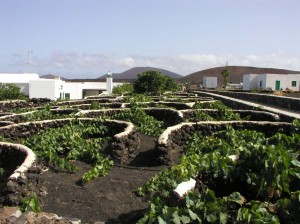 Windbreaks around vines in Lanzarote

When we had a holiday in Lanzarote where they have a problem with the trade winds blowing across the island, they coped by growing vines sheltered by semi-circular stone walls. Good idea but the volcanic rock is a lot lighter and easier to cut to size than Welsh granite and slate! Might take me a few hundred years to shelter the crops that way.

The thing with wind breaks is that solid walls cause eddies in the wind on the lee side, which can be more damaging than the wind. The ideal wind break is semi-permeable, like a hedge, allowing some wind through but reducing the force. On the other hand, I want to avoid shade as much as possible. Nothing is ever as simple as it seems!

The other thing for me to consider is where to site a greenhouse and polytunnel. Although a well constructed greenhouse or polytunnel will resist strong winds, it only takes a small flaw and the wind can give you big problems. I’ve seen a greenhouse lifted and dropped 3 plots away on the allotment because it had a couple of broken panes that allowed the wind in. So some shelter for them would be a good idea.

I’d hoped to at least have the greenhouse up and running this year we’re into November already so it’s pretty unlikely.

Back in the big wide world, my pals at growveg.com are up for an award for their website. It’s nice to see a gardening site short listed. You can vote for them until 12th November here.

I’ll be getting a little more regular with my online diary now things are settling down. Although I was late with November’s newsletter, hopefully December’s will be out on time.