Farewell for a bit

Down to the plot at the start of the week to retrieve some of the pots etc ready for the move. It’s amazing how much I’ve got squirreled away on it. Sprayers, sprinklers and pots soon filled the car whilst Val got another few kilograms of tomatoes, some more courgettes and even some beans that I’d missed.

The rubbish trailer is on site, which is fortunate as I found quite a few bits to throw ranging from empty pop bottles to half a pack of seeds from 2007 that had slipped under some pots.

Of course it wasn’t one way, I noticed a good length of plastic drainage pipe that might come in useful so that was rescued from the trailer. Val was not impressed and muttering about us needing two removal vans!

I’m leaving the greenhouses because they’re going to be difficult to move along with everything else. Plus old glass is brittle and very tricky and Val has said I can have a new greenhouse to celebrate the move for Christmas,

We’re leaving the green chilli peppers until the last minute in the hope they’ll ripen up. I did hear someone on Gardener’s Question Time say peppers will redden off-plant in the presence of ethylene gas (as from ripe bananas). It’s got to be worth a try! Amazing how much I’ve still got to learn.

We took a lot of the gardening gear across to the new house in the week. The chap we’re buying from kindly agreed we can put things into the sheds although we don’t take possession until the 15th.  In fact, they were waiting for us and helped us unload! Never had such a good move before. After we’d unloaded we sat on the wall in front of the house enjoying the sunshine with a flask of coffee as we watched the sea in the distance.

Initially I was going to hire a transit van but Val reckoned we needed a bit more so I hired a long wheel base, hi-top transit, despite being quite convinced that was over-kill and a waste of money. Well, she was I right and I was wrong!

Having cleared the shed at home (mostly) we didn’t have much room left but we did manage to fit the water butts in and some netting, watering cans etc. Seems the coldframes, greenhouse bench and rotovators will be coming with us on moving day.

Later in the week our daughter, Cara, came down and helped me dismantle the Wonderwall brassica tent. I do hope our removal men will cope! She’s had one of the large plastic compost bins and the strawberry barrel along with squashes, pumpkins, tomatoes and enough cabbages to feed her and an army.

The table is covered with squash and pumpkins which will be coming with us on moving day. I’ve still a large compost bin to pack (how being the question!), various hosepipes and a couple of coldframes.

You don’t quite realise how many people you’ve got to know until you’re going. Lots of people who I’ve got to know over the last 8 years popping over to wish us luck. To those I’ve not had chance to say goodbye to – well Goodbye, Good Growing and pop in if you’re passing us in Wales.

Had a chat with Larry, the site rep. I apologised for the flush of weeds on plot 5 and said I’d try to deal with them before we left. He said not to worry, it will be a bit of a test for whoever gets the plot. He’s a bit fed up with a couple of plotholders who have taken over perfect plots and let them go to weed. Anyway, my soil is great and they’re only annual weeds that could just be dug in or hoed off.

Since the removal men arrive on Thursday and we’re nowhere near ready, I don’t think I’ll have much time online before we go. Once we’ve moved it will take a week or so to get the broadband up and running as well. So my next post will be from Fron Dirion in about 2 weeks time.

I’ve got to share this with you – it’s a lovely card our forum friend ‘Noshed’ (as in no shed, geddit?) sent us. You’ll notice it’s full of little jokes and references – like the fact we’re leaving as BT install super-fast broadband and that we’re a sucker for stray cats! Click for a larger version. 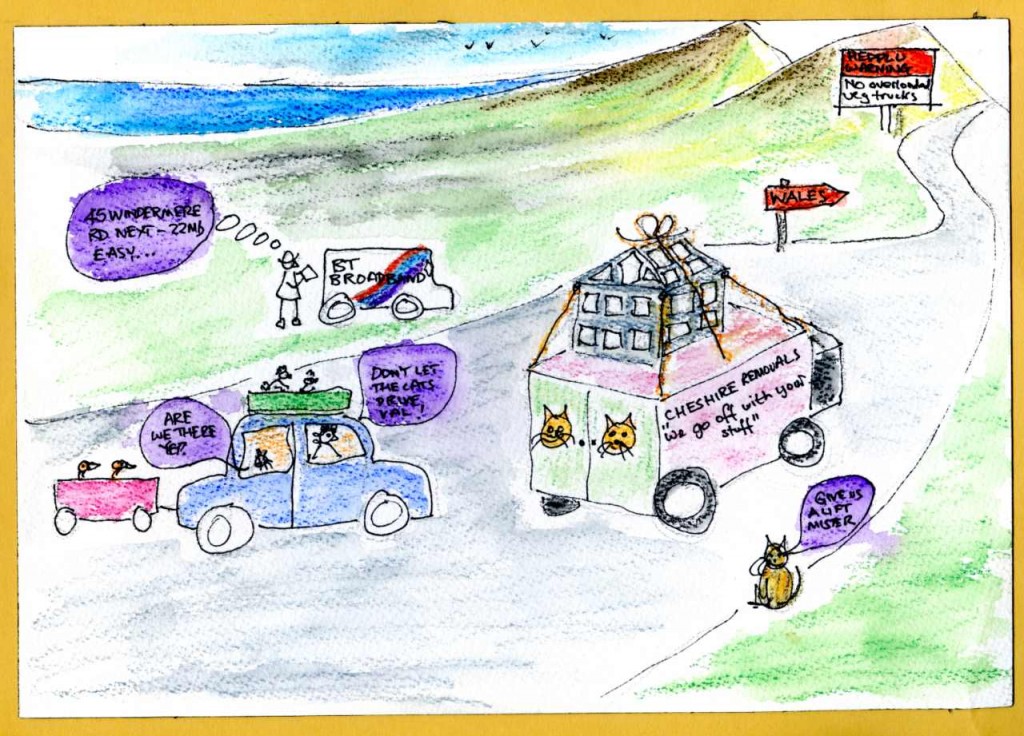 6 comments on “Farewell for a bit”

Leave a Comment Here on Farewell for a bit Cancel reply