It was too good a day to spend the afternoon inside messing around with the computer so down to the plot. I filled a flask with iced tea (I’m the saddo who loves the stuff), grabbed a load of carrier bags and my sun hat and away I went.

It wasn’t too busy down on the site and I was looking forward to a sunny afternoon but the big chap in the sky looked down, noticed my sun hat and kindly supplied a load of cloud.  So an afternoon in the overcast but at least it didn’t rain.

My first job was to harvest three rows of King Edwards. You may recall these were hit by blight and I cut the haulm off to prevent it spreading down to the tubers. Once the blight is actually in the tubers there is nothing you can do, you’ve lost the crop. Once the haulm is taken away  the tubers stop developing and that is that. Leaving them for a couple of weeks at least will prevent the blight spores from infecting the crop and you will at least keep what has grown so far.

I’m pleased to say that it seems to have worked. Only one stinking rotten blighted potato in the lot. Unfortunately, the crop had really developed. Lots of peas and marbles and not many reasonable sized potatoes. No really large ones at all. Not only does this mean a lower crop but it is actually a lot harder to harvest them. You need to get the little ones out as they are a disease reservoir  so it’s very much a hands and knees job.

In ideal conditions from 45 row feet I would expect 40 Kg of crop but we’ve got about 17 kg after the little ones and damaged are taken out. Still, the Sarpo are looking brilliant and I’ve no doubt we will get a really good crop from them.

I’ve been growing some Pavillion and Aalsmeer cauliflowers on at home and they’ve filled their 6″ pots so time to plant them out. I’ve found in the past that they form early providing golf ball sized curds if they don’t get planted out in time and I really like cauliflowers so this is my last chance for some decent ones.

Once in they all get netted to prevent those lovely pigeons from eating them. They were sat on the electric wires watching me plant them – I’m sure they were discussing which to eat first. Well tough luck, pigeons, they’re covered in nets!

17 plants onto plot 5 and three onto plot 29 where the peas were.

Val arrived around 8pm with the car expecting a load of potatoes to go home. Bit of a feeble load but it did save me a walk. After six hours I was feeling a bit tired and very ready for something to eat so at least a lift, even if it is only a couple of hundred yards, was welcome.

No signs of the intruders returning to the site, by the way. May have a little wander round to the site late Saturday evening.

Photo Below: The potatoes being harvested and cauliflowers under nets behind. 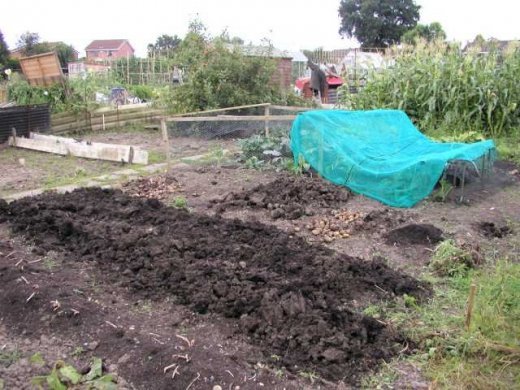