When you buy a packet of seeds it will often have an indication of when to sow them on the back For example, this could be March, April or May. Now the beginner is going to think that sowing on 1st of March is fine wherever they are, which often leads to disappointments.

Someone in the south east of the UK is likely to be fine but north of Watford things change. The warm weather comes later and often departs sooner. I’ve put a map showing the seasonal differences across the country on the Month by Month Growing page.

With the best will in the world, that can only be a rough guide because different places in the same area will have different micro-climates.

Our own conditions are affected by altitude, exposure and the sea. We’re 200 metres above sea level which makes more of a difference than you might think. Usually we’re about 2 to 2.5 degrees cooler than the towns at sea level – the equivalent of moving us a few hundred miles north. 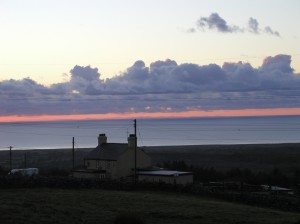 Sunset over the sea, you can see the mountains of Wicklow on the horizon.

Next we have exposure. It’s always windier the higher you go because there are less hills and trees etc to slow and disperse the wind. Snowdon is noted for high winds and we often get gusts here of 50mph or more. The wind has a cooling effect – you’ll have heard of the phrase ‘a lazy wind’ meaning that it goes through you rather than round you, our wind is positively idle and wind chill can easily make 5 degrees difference.

Cold pockets. Cold air is denser than hot air and so tends to roll downhill until either dispersed or held to form a frost pocket. The walled garden is sheltered by trees and a stone wall further up the hill but cold air still rolls down to some extent.

To reduce this problem, we’re fitting wind-break netting along the wire fence that keeps the sheep out of the garden.

The sea has an effect on climate, without the gulf stream the UK would have a climate more like Canada with long, very cold winters but knowing our luck we wouldn’t get the good summers enjoyed in Canada.

The good news for us is that our closeness to the sea keeps things a little warmer in winter than they would otherwise be. It’s a giant hot water bottle. So our last and first frost dates tend to be earlier and later than if we were far inland.

The mountains to the east have an effect as well. The clouds just love dumping their rain before hitting them. Snowdonia is actually one of the wettest parts of the British Isles, so lack of water is rarely a problem 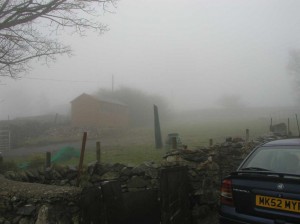 Insolation – the amount of sunlight received also has an effect. Because of our position and altitude we often find ourselves in a thick fog, which is actually low cloud. Dropping down to the coast, it could be sweltering in the sun whilst we’re shivering in the clouds.

To sum up our climate, our growing season is generally later than our location might indicate and  cooler but we’re fairly secure from frosts.

The other challenge we have for growing is the soil itself. I’m fond of joking that I’ve grown on sandy soil, I’ve grown on clay soil but this growing on rock is pretty difficult!

The soil itself is tending to the sandy but it’s very stony. Stones range from egg sized to granite boulders! In some places it’s almost impossible to dig down because of the stones. It’s also very thin and lacking in organic matter. Finally, it is a very, very acid soil.

At one time all this area was thickly wooded with ash, oak and other indigenous trees. But the wood was cleared to create farming land, harvested for shipbuilding (N Wales was a centre for shipbuilding in the past) and moving on, wood was a vital resource for the industrial revolution and even coal mining required huge amounts of wood for pit props etc.

Once the forest had gone the topsoil was eroded and the complex eco-system of a woodland replaced by the simple eco-system of human agriculture. Generally little is done here now but to let the sheep eat the grass and fertilise it with their dung except for burning off gorse on the moorland.

The soil has become more acid over time and even the grass is poor being swamped with moss. Soil tests revealed a pH of 5 and showed no nutrients whatsoever although there must be a little.

Turning this land into good growing land can be done but it’s a long hard job. Just scattering some fertiliser and lime will help but the real answer is to restore the organic matter in the soil and re-build a complex eco-system in the soil.