In October 2010 we achieved our dream of owning a small holding in North Wales when we bought Fron Dirion. We’d fallen in love with the area when we visited the Llyn peninsula on our honeymoon, a few years back now!

We’re situated at the head of the Llyn peninsula some 5 miles south of Caernarfon near the village of Penygroes. To the front of the house we look down the hill to sea and can see Anglesey to the north. On a good day at sunset we can see the mountains of Wicklow in Ireland on the horizon. Behind the house we’ve fields and from the back field we can see Snowdon in the distance. 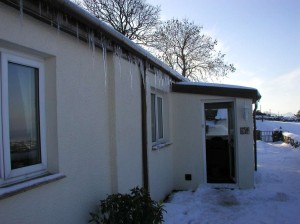 A Warm Welcome to Wales!

We’ve got nearly 4 acres of land in total, divided up into fields with dry stone walls in varying states of repair. The fields are unimproved pasture given over to grazing for sheep. At present we let these for a nominal rent to a local farmer for his sheep.

Just after we moved the worst winter for 100 years struck and most of our energies went on keeping warm. One day we left Caernarfon and it was minus 7 degrees but as we climbed the hill to home the mercury fell to minus 15 Celsius!

They say it takes a year to know a place and we must be slow learners because it’s taken us nearer three years to realise we’d got our plans for the place wrong. Originally we intended to grow most of our veggies in the field to the north of the house but we hadn’t realised how the wind blew. Often the windiest place in the UK is Snowdonia and we’ve had sweetcorn blown out of the ground.

I’ve built compost bins and half a dozen deep raised beds there as well as some barrel slices, a raised bed with coldframe and a few slightly raised beds. They’re fine for growing anything so long as it isn’t tall but that rules out more than you might think. Most of the brassicas, beans both tall and dwarf as well as broad don’t like it. The grass, comfrey and eventually some green manure crops will provide compsot 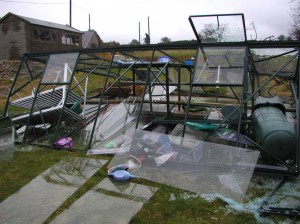 There’s also a large comfrey patch established and a number of trees planted to the high east side of the field that may form a wind-break given 10 years or so.

In the lee of the old cattle shed we’d placed our greenhouse on a purpose made slab base but one morning at the end of March, winds gusting to 100mph hit from the east and the greenhouse turned into a pile of twisted metal and broken glass.

In hindsight (the exact science!) we should have talked to our neighbour. He pointed out that we would have been better to use the area on the other side of the house. In effect there is a walled garden that is actually as big as an allotment although it appeared much smaller due to being shaded by an incredibly overgrown hedge. 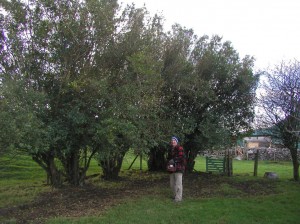 Overgrown Hedge in walled garden with a friend and chainsaw

We’ve laid a concrete path up to walled garden which makes getting a wheelbarrow up easy.

Then there is another patch sheltered by stone walls with an old pigsty and finally a fairly flat patch next to the house. This is where the replacement greenhouse will be going once it is cleared, the old rhododendron being a bit of job to say the least.

Behind the house there’s a path and then a raised bed about 1.2M wide before a high stone wall and the fields beyond. This gets a surprising amount of light although it’s  a bit of a tunnel. We’ve planted this up as a decorative border.