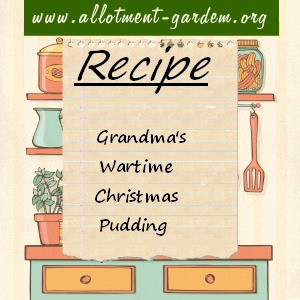 By 1942 this would have been a very luxurious pudding and the ingredients would have taken months to save up. Raisins, sultanas and currants were often not available, lemons very rarely in the shop. Suet being a fat was on ration as was sugar, of course.

Eggs were not easy to find unless you kept your own poultry although dried eggs were sent from the USA which would be substituted in baking. The spices were probably those left in the cupboard in 1939 – not a priority item when the shipping space was needed for so many other things.

Steaming is traditional but you can cook many steamed puddings in just minutes in the microwave. We owe microwaves to WW2 as well – the magnetron that makes the microwaves was developed by British scientists to improve radar accuracy.