For hundreds of years, if not thousands, bread has been made in the same way. Flour, water, salt and water combined with yeast as a raising agent. In 1961 a new method was developed, known as the Chorleywood Process which reduced the time to make bread and the labour input, thereby reducing manufacturing costs. The age of industrial bread was born. 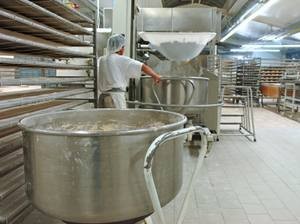 What is wrong with modern bread making?

For a start the wheat is milled in high speed steel mills at a high temperature. This smashes apart the starches making it easier for the enzymes and improvers to work on the flour but reducing the nutritional value.

This process also makes the flour able to absorb more water. So when you buy an 800g loaf of industrial bread, you pay for a higher water content. In fact nearly half of your industrial loaf is water.

This wheat flour is then mixed with water, soya flour, fat, baking aids, ascorbic acid (designate on packaging as E300) and yeast. The mixing arms rotate at about 400 rpm for around five minutes, transferring energy to the dough

The reactions created by this violent input of energy, assisted by the ascorbic acid, releases the gluten in the wheat very quickly and produces a stiff dough in a small fraction of the time compared to the traditional proving process used at home and in craft bakeries.

This part of the process is being linked by some people to the increase in Coeliac disease, a serious gluten intolerance.

An important part of Chorleywood Process is the use of a hard fat. This works with the gluten to create a stiff dough that will rise very quickly and retain its structure during the baking and cooling of the bread. Until recently hydrogenated fats were used because these contain more stable heavy fat molecules, which give the fat a higher melting point.

Recently bad publicity about hydrogenated fats, in particular their implication as a key contributor to heart disease, has created a switch to fractionated fats. These are created from the processing of ordinary vegetable oils to remove the heaviest fatty compounds, usually by cooling the oil to make the heavy fats crystallise.

They therefore have the same properties as hydrogenated fats, and may possibly cause similar health problems. Often, when a manufacturer states they no longer use hydrogenated fats, it’s likely that they are using fractionated fats instead.

After mixing the dough is poured in bulk and left for a few minutes before processing into tins, or onto trays, where it is left to prove for up to a hour (again, perhaps a half of the time of that used traditionally).

The Chorleywood bread making process uses two or three times the usual amount of yeast compared to traditionally made bread. The extra yeast creates a large volume of gas and in the process a spongy loaf. The proving dough may also be put under a low pressure vacuum to make it rise much faster than if it were at ambient air pressure.

This large increase in the amount of yeast we consume in our bread is being cited as one possible cause for the growth of yeast intolerance, irritable bowel syndrome and thrush (candidiasis / Candida albicans) disorders over the past few decades.

To help the fats bond to the wet flours, emulsifiers are also added to the mix (usually E471 or E472e). In addition a small amount of vinegar is added as a preservative. Probably worse than these additives for health, is the addition of relatively large amounts of salt, about double that used in traditional recipes. High salt intake being linked to heart disease and raised blood pressure.

Finally your industrial bread with its high water content is an ideal breeding ground for molds, so it is often dosed with an anti-fungal compound. Yummy!

Primarily because of the milling process, the vitamin content is lower than that of traditional stoneground flour. Accordingly, by law, vitamins are added to the dough mixture to compensate. We take them out then add them in. Doesn’t seem sensible really, does it? Why not see how easy it is to make your own bread?