History of Chemical Use in Food Production

Since man became settled and grew crops, pests and disease have been a problem. There was little he could do to combat these for insects have numbers on their side and spores can not be seen. 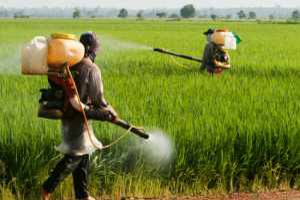 Jump forward a few thousand years and chemical weapons began to be used. The Victorian gardener and farmer had such wonderful things as arsenic, copper compounds and nicotine in his armoury. Combine these with artificial fertilisers and miraculous increases in yields and visible quality arrived.

Of course these new weapons were incredibly toxic took their toll on the users so the search went on for new ways to destroy the competition for our food crops.

By the 1940s a new class of chemicals had come into being, organo-phosphates. Apart from being the basis of nerve gas, which is effective at killing people in incredibly small amounts, they could make pesticides that were cheap and very effective. In the post war climate of food shortages and a belief that science offered a cure for everything these were adopted with great enthusiasm.

By the 1970s we new that there were two sides to the equation. DDT had killed billions of mosquitoes and their malaria parasites but was turning up in the fat of polar bears and causing birth defects in birds across the world.

Obviously these chemicals needed to be tested for their effects on people and the environment and where possible safe levels of use determined.

So, here we are today with extensive testing of chemicals before they are approved for use and tests carried out on our foods to ensure we are safe. In theory

I was shocked to read on the Pesticide Action Network about this testing.

First, in 2005, the UK government tested 37 types of food, 3,787 items in total for between 13 and 118 types of pesticide residue. This may seem a lot of tests but consider the tens of thousands of foods available in the average supermarket sourced from across the world. Not very reassuring.

They published a summary of their results that showed 31.9% contained traces of pesticides and 1.7% had levels above the legal limit known as the Maximum Residue Level.

As if that wasn’t bad enough, I quote directly from the Pesticide Action Network

“Bad though this may seem it is not the full story. The MRLs which the government use as their standard in these studies is not set according to human safety levels.

Rather it means that if a farmer adheres to ‘good agricultural practice’ their produce should not contain residues above the MRL.

The Pesticide Action Network UK have now carried out a study to determine whether these legal limits are above or below human safety levels.

They took seven of the foods most likely to contain pesticide residues and looked at the 36 pesticides that are found regularly or which most frequently exceed the MRL.

The research suggests that, of these 36 pesticides, 19 have MRLs that are NOT set below the safety level for one or more of these seven foods.

This indicates that even where pesticides are found below the MRL in many cases the levels found will still exceed human safety levels.“

Now, apart from what we eat in our food, the world is full of chemicals that do not naturally occur or are normally present at very low levels and these inevitably will find their way into our food chains and our body. At the same time, I would question the concept of a ‘safe level of pesticide’.

You can test and establish a harmful dose for single chemical but it is not practical to establish what happens when you combine a chemical with one or more other chemicals. Just taking our 118 pesticide means we would need to test 118 raised to the power of 118 to cover the possibilities. Just raising 118 to the power of ten gives the following number: 523,383,555,379,857,000,000

I wonder why we have so many cases of asthma and eczema nowadays, what was a rare condition is becoming the norm. Who knows what other illnesses are developing and increasing due to the continual chemical onslaught on our bodies?

I’ve also noticed many organic growers tend to have a faith that old remedies and potions made from ‘natural’ products such as plants are safe. Even nicotine sprays made from old cigarette ends are considered safe, although nicotine is a very strong poison that can easily kill a child if drunk and will kill both beneficial and harmful insects.

The news is not all bad, developments such as Sarpo blight resistant potatoes and breeding brassicas that resist club root means that we can enjoy high yields without the addition of invisible and tasteless pesticide and other chemical residues.

By growing our own food or buying certified organic foods we can reduce the chemical insult to our system and hopefully the development of new varieties will reduce the cost of wholesome foods.