Storing in oil is a traditional method that probably dates back to the beginnings of civilisation when man discovered olive oil in the fertile crescent of the Mediterranean. 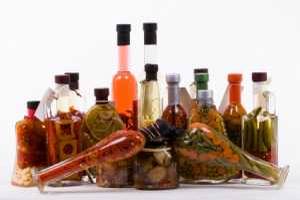 Nowadays it is used more often as a way of producing flavoured oil than an actual storage method and the main vegetables used are garlic, chilli peppers and dried tomatoes. Not only can you use the produce, the flavoured oil can be used for salad dressing or in cooking.

The theory is quite simple, the produce is covered in the oil, which excludes air so preventing the growth of spoiling organisms.

It is recommended to heat oils, especially with chillies and garlic as they can harbour botulism spores, to around 140ºC/285ºF before pouring into the jar/bottle. This also has the benefit of speeding up the infusion. Alternatively use dried chillies – it is the moisture in fresh chillies (and garlic) that can, possibly, allow botulism to develop.

Once opened, to be on the safe side as oils also tend to go rancid relatively quickly once exposed to air, keep them in the fridge and monitor them closely for spoilage. They will need to be used up in about 2 weeks. Cold oils are the best ones to use with green herbs.

If using corks, they should be new and boiled for 10 minutes or kept submerged in boiling water for 15 minutes before use.

This not only sterilizes them but makes them easier to push into the bottle. Screw tops also benefit from sterilizing in this manner.

NB Herbs are best picked just before they come into flower, early in the morning before the sun gets too strong but not after it has rained.

More Information on Oils and Vinegars