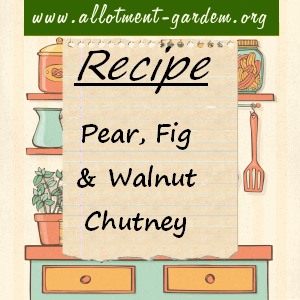 This is adapted from a recipe I found on a BBC website last year. That one doesn’t include the whole spices and uses sultanas, but I prefer using the figs as I find they give a better flavour which complements the pears nicely (as do the spices!). If you prefer a less chunky texture, chop everything (including the walnuts) into smaller pieces.

Chop the figs and place in a small bowl together with the orange and lemon zest and juice, and leave to soak whilst preparing the rest of the fruit. 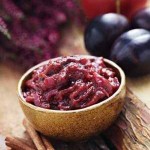 Chutneys - How to Make Chutney

Chutneys originated in India – the name derived from the Hindu word chatni . They then came back to Britain with explorers where they were a hit and are now a very popular preserve all over the world. The scope of chutneys is endless and t... 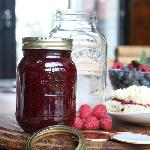 Store, preserve, label and cover your home grown fruit and vegetables with this extensive range of products. You've made it so it is only fair to show it off at its best! 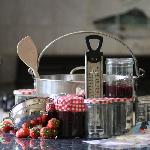 All the equipment you need to easily make your own jams, chutneys and preserves. Say goodbye to mass-produced supermarket jams and preserves and start producing your own unique accompaniments to meals using your own produce.
Posted in Val's Preserves, Apples, Fruit, Vegetarian Recipes, Chutneys, Lemons, All Recipes, Oranges, Pears