Free Seeds when you buy Our Bestselling Books
Home › Gardening Information › Flood! Safe Growing & Harvesting of Crops After a Flood

Flood! Safe Growing & Harvesting of Crops After a Flood

In recent years many people have suffered flooding in urban and country areas. Once the waters recede this leaves gardeners with the problem of what to do on their plot. What is safe to harvest? What is safe to grow? And what about the crops that are growing and may have survived their immersion? 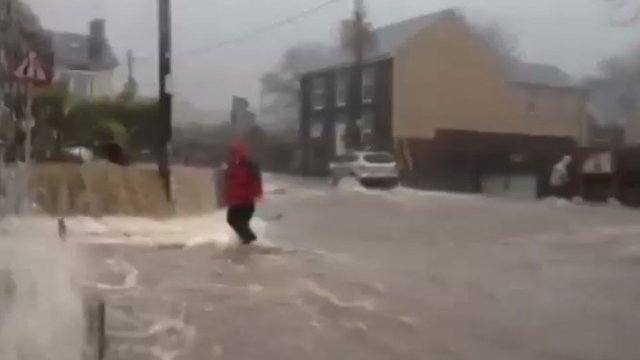 What is the Problem with Crops after a Flood?

The problem for growers isn’t the land being flooded for a few days, it’s the sewerage contained in the flood water, rising from the drains that presents a real health hazard.

The problem with sewerage is not just that it is smelly but that it is loaded with dangerous bacteria. All the bugs that make us ill that people have flushed away along with their business.

What is safe to harvest and eat after a flood?

Don’t trust any leafy crops in the ground like leeks, cabbage, cauliflower or kale to be safe to eat, even well washed. Compost them.

Solid root crops like parsnips & carrots should be well washed and then soaked for two minutes in a solution of 2 tablespoons of bleach per gallon of water. Then rinsed again and peeled prior to use.

IMPORTANT: Any tubers or roots with splits that let the flood water in should go straight to the compost heap.

Cook well. If you have a pressure cooker then use that rather than the ordinary saucepan or steamer. The reason being a pressure cooker will take the temperature up to 120°C which will cope with any pathogens. Mere boiling won’t kill some bacteria although it will get most.

When will it be Safe to Grow Crops After a Flood?

Over time, the soil will clean itself. The action of sunshine alone with its ultraviolet is a great steriliser.

The 100% safe answer is not to grow any crops that are consumed raw (like lettuce) for two years and crops destined to be cooked for one year in sewerage contaminated soil. Without access to a laboratory and the money to pay for testing it’s a best guess. It all depends how much contamination was put on to the land from the sewers.

Cleaning and restoring the soil

My advice would be to say the plot has a year out of production and use that year to clean and improve the soil.

Before you start, is your tetanus protection up to date? It’s not even a painful jab but tetanus can kill you and goodness knows what is in the soil now.

The nutrients will have been washed out and the balance of micro-nutrients completely messed up. A couple of ounces of a general fertiliser like fish, blood and bone or Growmore per square yard will bring up the NPK levels.

Calcified seaweed will really help the micro fauna and flora of the soil – a sort of pro-biotic yoghurt for the soil. We really want the natural bacteria etc. up to par as they help to decontaminate the soil of the harmful bacteria not normally found there.

Rotavate or fork the calcified seaweed in to the top soil and leave the soil rough and bare for a week to take advantage of the sunshine’s sterilising effect. It’s well known that sunshine sterilises which is why dairymaids would put their equipment outside on sunny days when not in use.

Next; sow a green manure, cut it down when ready and compost it on the heap. Then rotavate the top 15cm to 20cm (6″ to 9″). Leave for a few days to a week to allow the sun to work on it and then rotavate again. Then sow another green manure.

Repeat this process throughout the the year, changing the type of green manure to suit the season. Sowing the green manures means that you keep the weeds off whilst producing useful compost and improving the soil’s structure.

After a year you should have clean soil in a better condition than before and a load of compost. Your future crops should be better than ever.

Crops you can grow immediately after a flood

Saladings, spring onions, early carrots, even new potatoes can be effectively grown in containers along with many other crops.