Free Seeds when you buy Our Bestselling Books
Home › Gardening Information › Lunar Gardening, planting and gardening according to the phase of the Moon

Lunar Gardening, planting and gardening according to the phase of the Moon

I have been gardening using the rhythm of the planets and the moon for many years and I apply the same principal passionately to every aspect in the garden and allotment. This includes planting, sowing, weeding, pruning, picking, turning the compost heap – to name but a mere few. Farmers and gardeners have been using the moon phases method for many hundreds of years and I believe Prince Charles is also an advocate! 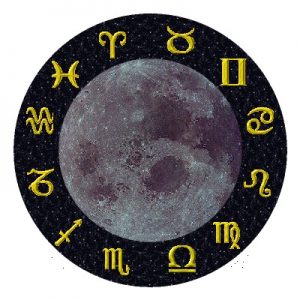 I have had mixed reactions when talking about it, varying from polite head nodding agreement to rolling of eyes and belly laughter. The reason I tell people about it is because everyone asks me how I make and keep the garden so healthy and vibrant and how everything grows so well. Because lunar gardening works!!

I use a combination of the waxing and waning moon and the moon’s passage through the sidereal (or star zodiac which is in a fixed position). This is not the same zodiac as the one used by astrologers (this is the tropical zodiac which moves). The sidereal method works much better for crop purposes.

The basic principal is that the moon has pulling effect on all water. This includes the sap in plants. The sap rises during the waxing moon and falls towards the roots when it wanes.

The moon also passes in front of each sign of the zodiac during the month, spending roughly 2.5 days in each one. Each sign corresponds to an element which in turn corresponds to the best crops to plant.

In my experience, the water signs are the most fertile(most things will grow I have found) followed by earth, air and then the fire signs which I find are the best for clearing as they are more barren.

Some Examples of Success with Moon Gardening

A couple of years ago, I was the only person on the allotments who managed to grow carrots and I have never used any sort of artificial fertiliser. I have always had the healthiest of plots!

My beautiful clematis is pruned on a root day when the moon is waning so that all the sap goes into the roots ready for the season; peas and beans are more productive when planted on a flower day in an air sign because the number of peas/beans is dependent on the number of flowers. More flowers equal more pods.

During the 3rd quarter (waning moon) I plant root crops and trees (good root system) and in the 4th quarter to the new moon I weed and cultivate, turn the compost heap etc.

Mow the lawn during a waning moon – no it’s not a myth!

If you want to weaken a plant (usually a weed) then prune it during a waxing moon so that the sap isn’t going into the roots to make it rise again.

I fertilise when the moon passes a water sign.

All the signs are slightly different and it is worth taking into consideration eg if I can possibly avoid it I won’t plant anything during Leo as it is the most barren and I have had very weak plants in the past.

It takes a bit of effort and a bit of patience to find the perfect day for the task, and my success has come from much trial and error. It is worth it!

I use an excellent book called “Gardening and Planting by the moon” by Nick Kollerstrom to tell me which sign the moon is passing through and therefore which ”day” it is , but there are other really good sources readily available. – Buy a book and some seeds and give it a go!

This article was submitted to the allotment garden site and is copyright 2013 Tansy Jams.

As the author admits she has a range of reactions it is worth pointing out that gardening by the moon, moon planting etc. was the norm in most of history. Even just 50 years ago it was a brave farmer who planted when the phase of the moon was against him.

Lunar gardening and planting may seem to be just new age nonsense but, to my knowledge, there has been no long-term (5 year +) trial. Which™ carried out a one year trial in 2003 on a limited range of crops that showed no difference in planting on Good or Bad days but I would not consider that conclusive proof either way.

Just because you cannot understand how something works, doesn’t mean it can’t work. For example: how does electricity get through solid wires? Most of us don’t know but we accept that it works.

On the other hand, we now know many things that were accepted fact were wrong. You’ve just got to make your own mind up.