If you think an allotment is a lot of work today, spare a thought for those poor plot holders of yesteryear who had a much tougher time and were far more dependent on the crops the allotment provided to feed their family 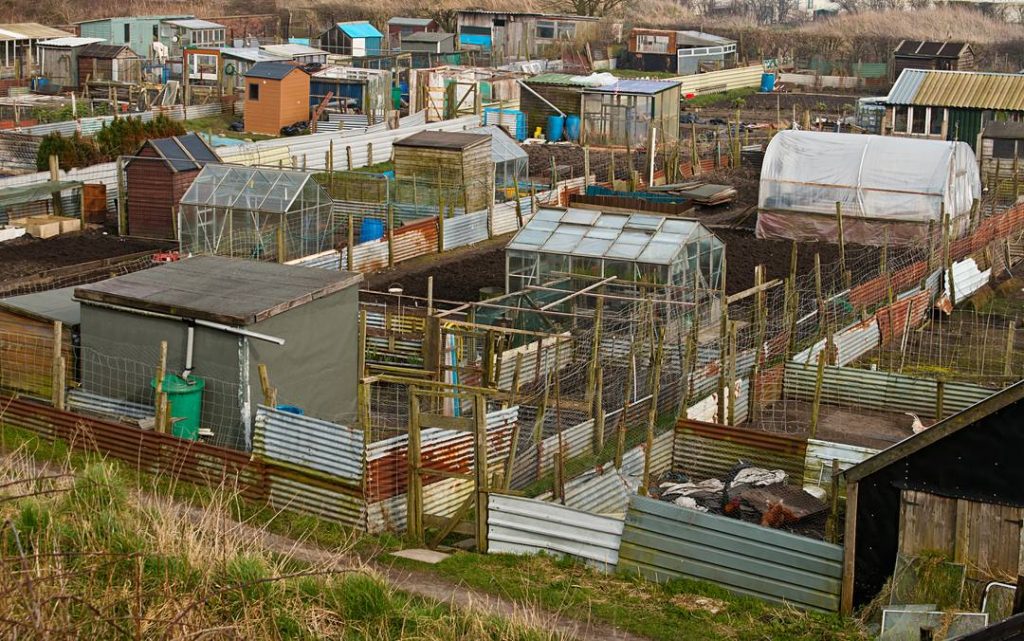 Once a site had been chosen for an allotment, the ground needed to be prepared. This was an arduous business for all parties involved. The landlord was often responsible for the costs involved in establishing a site, which was usually an expensive endeavour.

It was not unusual for land to be in poor condition, so it generally needed to be cleared first of any debris, before undertaking any further preparation.

One account tells of how the land was ‘in a high, cold, bleak situation, and lying at such an inclination that it could not be ploughed at all.’ Furthermore, the allotmenteers had to carry the manure up four miles of steep hills.

To prepare land, it needed to be dug over, drainage ditches installed, paths laid and fences erected. Landlords sometimes avoided the costs of these preparatory works by making it the responsibility of the tenants to undertake the labour. Often though, labourers were unwilling to accept this task, and refused the offer of land altogether.

In other instances, tenants accepted the task of land preparation and began with good intentions. However, and not infrequently, the commitment proved too much and the site was abandoned after a short time.

Once the land had been cultivated, it was necessary to maintain it. It was not only the land itself that needed to be kept in good order but also the fences, gates, paths and drainage systems. Maintenance of the infrastructure was usually the responsibility of the tenant, though sometimes landlords undertook this work and applied an extra cost to the labourer.

Landlords sometimes entered into an agreement with the plotholders, whereby, if the tenant quit his allotment, the landlord would pay for all improvements to the land, and also for any manure left on the allotment. This was not altruism on the part of the landlord, more a ploy to avoid the need for an official lease on the allotment.

Allotments were almost always dug by hand, hence the name ‘spade husbandry.’ The ground needed to be heavily fertilised continuously in order to yield good crops. Because of the need for manure for fertiliser, allotment holders were usually closely associated with pig-keeping.

Allotments had large amounts of vegetable waste, as well as barley and potatoes, on which to feed the pigs: the pigs, in return, providing manure.

Other sources of fertilizer were composted waste, night soil and manure, which was usually collected by children on the road, from horse traffic and cattle droves. Mud tanks lined with plaster and filled with liquid manure from the cow-house, piggery and privy was used as a liquid fertilizer.

Advice, was abundant, if not always sound. One advisor thought ‘the less stable dung you put on your ground, the better. It makes all vegetables rank.’ Another writer thought that by growing parsnips in poor soil ‘they lose much of the rank taste which they acquire in richer ground.’ Cobbett’s advice was rather more practical however. He advised:

If you find the ground dry at top during the winter, hoe it, and particularly near the plants, and rout out all slugs and insects. And, when March comes, and the ground is dry, hoe deep, and well, and earth the plants up close to the lower leaves. As soon as the plants begin to grow, dig the ground with a spade clean and well, and let the spade go as near to the plants as you can without actually displacing the plants. Give them another digging in a month; and, if weeds come in the mean-while, hoe, and let not one live a week. “Oh! What deal of work!”

Today, we are rather more fortunate in having John’s excellent books, Vegetable Growing Month by Month and The Essential Allotment Guide for advice. As a fledgling vegetable grower myself, I can attest to their helpful guidance!

Family on the Allotment Plot

In the second half of the nineteenth century, allotment cultivation was very much a family-based activity. Large families were likely to fare better, as indeed were those, whose plots were on older sites, which were more productive due to the previous intense husbandry. Usually, the men carried out the heavier work, such as digging and manure spreading, while during the summer, the women and children undertook the weeding, watering and picking.

What Crops Were Grown

Potatoes and ‘green-stuff’ were the crops most universally grown, although wheat was also grown along with carrots, turnips, mangel-wurzel (yellow beet), barley, peas, oats, rye and cabbages. Potatoes were an important crop because they were not widely available for sale throughout the country, but as a food source, they were easy to prepare, and, unlike bread, potatoes needed no further processing (such as milling). They could be stored over the winter, and provided a nutritious food source, at a time when most labourers didn’t have enough to eat.

They were also an economical investment with a high yield return. One wag told of how he had four potatoes to begin with, and they produced a peck. That peck produced three bushel, which produced thirty-nine bushel – that’s about 1.5 imperial tons!

Social Life on the Allotment

As the movement grew, a social and cultural way of life grew with it. Sometimes, there was an annual rent supper, which might offer roast beef and plum pudding. These occasions were also an opportunity for landlords to collect the rents, and tenants who made late payments were not allowed to attend. Sometimes, prizes such as, tools, money, or even fruit trees were awarded for the best specimens, the good management of allotments and the good conduct of the labourer. It was out of these early rent suppers that the current horticultural shows grew.

Today, allotments still require a high input to get a good return. Fortunately, digging ditches and carrying manure up four miles of steep hillside is not usually a requirement. On days when your back aches and your crops have been ruined through contamination by the inadvertent use of aminopyralid herbicide, spare a thought for those early pioneers and congratulate yourself for carrying on a very worthy heritage.