This article really covers both taking on a new allotment and converting any piece of ground like an old lawn to a productive vegetable plot. Usually the new allotment holder discovers he’s (or she) got the worst one on the site or at best one that has been vacant for six months and has grown a good crop of weeds. Don’t despair, often it’s easier to sort out than you fear. 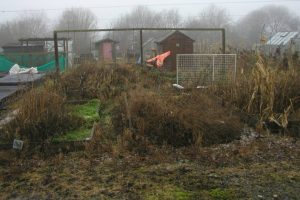 How to Start Clearing an Allotment Plot

First of all, walk around and see what you’re going to have to deal with. If there is any old metalwork, broken glass or building rubble bring it to pile at the end of the plot. Make sure you wear gloves – hopefully your tetanus jab is up to date because you’re going to shed blood at some point, I promise you.

If you come across old corrugated asbestos sheets seek advice from the council. This needs handling with care and proper, safe disposal.

What Weeds do You Have?

Next, take a look at what weeds you have. Some weeds like nettles, docks, buttercups and daisy all indicate that your soil is acidic as does the dreaded Mare’s tail (Equistum Arvense). Other difficult weeds are bindweed and couch grass. They all share the ability to re-grow from small pieces of root. If you’ve a mass of brambles then I’m afraid you really do have your work cut out, but it isn’t impossible.

Looking down 30 metres of weeds is enough to make anyone despair but break the heavy work of clearing and digging down into patches you can cope with in one go without feeling like death for two days. I found 8 square metres enough, gradually worked up to 10 but younger and fitter people may well do more in a session.

Take comfort from the fact that a mass of lush nettles and other weeds indicates the soil is in good heart with lots of fertility.

What to do to Clear the Plot

If you’ve a lot of tall weeds, then it’s worth borrowing or hiring a petrol strimmer with a brush-cutter blade and taking them down to about 15cm above the ground, leave brambles a little longer – anything up to 60cm.

Ordinary grass and annual weeds can be lifted like turfs. A mattock is very good for this, the flat blade going in almost horizontal under the root-mat and levering up but a decent spade will do the job as well.

Stack the turfs, grass side down and make into a box which you can cover with a tarpaulin to exclude light and water. In a year you’ll have some lovely loamy soil to use.

I’ve seen people hire a powerful rotavator and churn over the plot, chopping up the weeds including their roots into thousands of pieces. Three weeks later the perennial weeds grew from the root fragments and the plot was absolutely covered in weeds. They then gave up the plot.

Fork the ground over and remove any perennial weed roots. Docks go deep but like dandelions are fairly easy to remove. Nettles have a mass of thin yellow roots which are difficult but you can get them out.

Bindweed and couch grass are hard work, a piece of root as longer than 3cm may have enough energy to start and grow again. With Mare’s tail though, you have real problems. The thin brown roots are hard to see and go down to Hades (they’ve been found 2 metres down!) Just do your best but I’d say the only way to really win against Mares Tail, Bindweed and Couch Grass is to go chemical (see below)

These weed roots present another problem for you. If you put them on a cold compost heap, they’ll re-grow. You can put them in a black plastic sack and hopefully they’ll rot away in six months or so but better to drown them in a tub of water. Takes about 3 weeks.

With a bramble patch, it’s tough work digging out the roots. Leaving some cane on at least gives you something to pull at!

You’ll have heard about covering ground with old carpet to suppress the weeds. Well it’s not a bad idea in theory so long as the carpet isn’t there for more than a month or two.

The problem is that the weeds eventually grow through the carpet and it’s a nightmare trying to get the carpet put so many sites have banned them. I used a tarpaulin which did the same job without weed growing through.

I don’t like the idea of leaving the ground covered for a year to kill off everything; it’s wasteful, un-productive and just blessed ugly.

Quick Way to Clear a Plot

This is the easiest and quickest way to clear a plot. Clear the rubbish and strim down to a few inches above ground level. Rake up the strimmings and pop onto the compost heap.

Then spray the plot with a glyphosate based weedkiller, paying special attention to the perennial weeds. Leave for a week or two, re-spraying any perennial weeds that are still looking healthy. Then dig over or rotovate.

The weedkiller is taken to the roots of the perennials so killing them and making it possible to chop them up without the problem of re-growing.

OK, this method uses a weedkiller but given the number of people who start with the best organic intentions and then give in when they discover it’s hard work, I’d say use the spray and go organic later!