Allotment History – A Brief History of Allotments in the UK

This article covers what an allotment is, how allotments came about and some general information about allotments.

What is an Allotment? 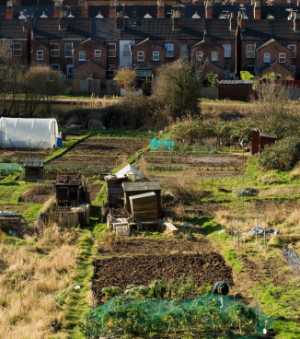 In the UK, allotments are small parcels of land rented to individuals usually for the purpose of growing food crops. There is no set standard size but the most common plot is 10 rods, an ancient measurement equivalent to 302 square yards or 253 square metres.

The land itself is often owned by local government (parish or town councils) or self managed and owned by the allotment holders through an association. Some allotments are owned by the Church of England.

Rental costs vary tremendously across the country. Some pay as little as £8.00 pa and others £80.00. Most tend to be in the region of £20 to £40 per year often with discounts for the unwaged, retired etc.

The history of allotments can be said to go back over a thousand years to when the Saxons would clear a field from woodland which would be held in common. Following the Norman conquest, land ownership became more concentrated in the hands of the manorial lords, monasteries and church. The reformation in the 1540s confiscated much of the church lands but they were transferred via the crown to the lords.

In the late 1500s under Elizabeth I common lands used by the poor for growing food and keeping animals began to be enclosed dispossessing the poor. In compensation allotments of land were attached to tenant cottages. This is the first mention of allotments.

Land was being enclosed and more and more people began to live in cities and large towns. This move from a subsistence economy to the more modern industrial system was increasing the numbers of the poor who, without the benefits of a social security system, could literally starve for lack of food or the land on which to grow their own food.

By the 19th Century the pace of change had increased and the General Enclosure Acts of 1836 and 1840 made it possible for landowners to enclose land without reference to parliament as long as a majority of them (in value and number) agreed to do so.

The General Enclosure Act of 1845 and later amendments attempted to provide better protection for the interests of small proprietors and the public. This was enacted in no small part due to fear of civil unrest and revolt and provided for land to be set aside for allotment use. The act required that the Commissioners should make provision for the landless poor in the form of “field gardens” limited to a quarter of an acre. This was really the beginning of allotments as we have today in the UK.

The act failed to actually provide much land for the use of the poor. Of the 615,000 acres enclosed only around 2,200 acres were actually to become allotments.

The urban allotment development was beginning to emerge, as evidenced by the “guinea gardens” brought into use on the outskirts of Birmingham by the second half of the eighteenth century. These however gradually disappeared as the outward spread of the city led to them being closed and the land used for building purposes.

Allotments and Cottage Gardens Compensation for Crops Act 1887 obliged local authorities to provide allotments if there was a demand for them. The local authorities resisted complying with the act and revision was required to strengthen the act.

To the Victorians allotments were a productive use of time keeping the poor away from the evils of drink and providing wholesome food for a workforce housed in tenements and high density terraced housing without gardens to speak of.

During the First World War Germany’s blockade caused food shortages which increased the demand for allotments. One source of land suitable for allotments but not large enough for general agricultural use was the land owned by railway companies. These parcels of land were often allotted to the railway workers and this is the reason that you will often see allotments by railway lines today.

Following the Great War there was a decrease in demand for allotments and this, combined with increased demand for building land for housing reduced the number of allotments.

Once again Britain was blockaded and food shortages the norm. The pressure was greater than that of the First World War and even public parks were pressed into use for food production. The famous ‘Dig for Victory’ campaign exhorted and educated the public to produce their own food and save shipping needed for war materials.

Food rationing kept the demand for allotments and home grown foods high until the end of the war although rationing continued until 1954.

The result of demands for more and more building land saw the re-establishment of the Allotments Advisory Body which in 1949 recommended a scale of provision of 4 acres per 1,000 head of population. This resulted in the Allotment Act of 1950.

Following the peak of 1,400,000 in 1943 there was a sharp decline in allotment provision to around 500,00 in the 1970s. The decline continued during the 1970s but at a much slower rate. During the 1970s there was a huge upsurge in interest in self-sufficiency and home food production epitomised by the television series The Good Life which ran from 1975 to 1978.

The rate of decline again increased encouraged by the continuing increase in land and housing costs, which created an incentive to hard pressed local authorities to sell allotment land for high prices to housing developers.

By 1996 there were around 297,000 plots available and, although definite figures do not appear available, since then the rate of decline appears to have decreased whilst at the same time there has again been an upsurge of interest in growing food crops.

Concerns about genetic modification of foodstuffs, chemical pollution and contamination of our food and the desire for the ultimate in freshness has seen empty plots filled and waiting lists appear for sites that previously had high vacancy rates.

It is possible that this increase in demand combined with a willingness to demand provision of allotments as allowed for under statute will see numbers rise from present levels.