Most allotment sites have two sorts of path, the permanent paths that separate one plot from another and paths on the plots themselves, usually defining sections or beds. As with most things on allotments, the paths tend to be a bit rough and ready using easily available re-cycled materials. 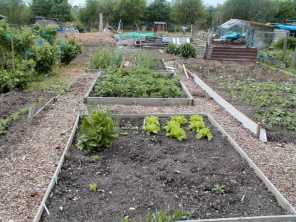 Most common is to just leave the paths to grow grass but this has its own problems. Grass tends to spread to the side and someone needs to mow them with a push mower.

Whilst not ideal, they will do the job but often tend to run wild and the grass spreads to the growing areas.

The next method used is to lay concrete slabs. They’re rarely properly laid, just being sat on the ground, but they do the job and take less maintenance than grass, just a bit of weeding between the slabs.

Even that weeding can be avoided by laying an inexpensive weed proof membrane and the slabs on top of that.

On our allotment site we had a problem with grass paths in that nobody had a push lawnmower but we were fortunate in that the council dumps vast quantities of wood chippings on the site.

These covered the paths and, so long as they were thick enough, prevented grass and weeds growing. Some mares tail used to pop through as did the odd dandelion or dock leaf but that was a two minute job with the hoe or a quick squirt of weedkiller. In wet weather the chippings stopped the path becoming a muddy quagmire and gave a firm footing.

When there are a lot of chippings available, these can be used to create paths across the plot as well as between plots. They were also good for around raised beds etc. Some people put weed suppressant matting down and laid the chippings on that.

Personally I didn’t like to do this as the wood chippings naturally rotted down over the course of a couple of years. The matting wasn’t a bad idea for the permanent paths but for temporary ones, I liked being able to just dig the chippings in as they rotted to add to the humus in the soil.

One problem I’m facing now is creating some permanent paths up slopes to the veg plot and orchard. The orchard is quite a steep slope and I had considered wide steps but steps are really difficult to negotiate with a wheelbarrow or machinery like the wood chipper.

The answer to the steep slope is a concrete path. I’d not suggest you do this if there is a chance you’ll change your mind on where the path is to run. Once it’s done properly, it’s done for life and taking it up is a big job. Many allotments ban permanent fixtures anyway.

See: How to Build a Concrete Garden Path