Allotments were conceived as a way to alleviate the distress of the rural poor. Towards the end of the eighteenth century, many rural labourers lost their land and jobs. The misfortunes of those workers had been largely blamed on the process of enclosure. 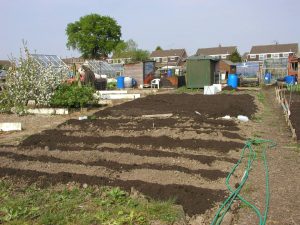 The enclosure of the English countryside was a means by which many small-scattered landholdings were consolidated into a lesser number of larger holdings. This process eventually removed food production from the hands of numerous small producers and placed it in the hands of a few, wealthy landowners.

In addition to losing their land, peasants, cottagers and yeoman farmers also lost many of their common rights, which had allowed them to use the commons for grazing animals and forage for fuel and food.

The loss of land, combined with the poor harvests of 1794-6 and 1799-1801, the Napoleonic Wars, a decline in real wages, and a severe lack of alternative employment opportunities, caused such great economic hardship that by the end of the eighteenth century, there was a large underclass of hungry, downtrodden and disaffected people that needed help.

Help in those days came in the form of Poor Law relief—the eighteenth century equivalent of a welfare system. In reality, being the recipient of Poor Law charity usually meant ending up in the workhouse.

A few souls eventually began to feel sorry for the poor and hungry workers. This enlightened attitude was unusual in those days. In fact, prior to the middle of the nineteenth century, hunger was very much seen to be part of God’s divine plan. If you were hungry, it was because you deserved it.

Eventually, however, social reformers (such as William Cobbett) recognized that hunger was not actually the fault of the hungry. Instead, the situation these people found themselves in was the result of a failing socio-economic and political climate.

The ruling classes began to realise that the hunger of the poor hurt not just themselves, but endangered society in general. With poverty came unrest, crime and a breakdown of the social order.

Those who had become rich through enclosure now had to pay an evermore-burdensome Poor Law tax. Suddenly, the solution put forward by reformers, of land grants to the poor, seemed like a good idea. It was seen as a way to restore the old social order, reduce the Poor Law tax and help the hungry to help themselves: a sort of, grow-their-own charity.

By 1793, there was an extensive movement to provide the labouring classes with a portion of land. However, in the beginning, things did not go too smoothly. By 1805, the interest in land provision for labourers had receded because of improved harvests and more stable food prices. Consequently, the movement failed, and although lobbying continued, by 1829, there were only a total of fifty-four allotment sites recorded.

By the summer of 1830, the position of the farm labourer had again deteriorated to the point where unemployment was rife and many workers were on the brink of starvation. A series of riots ensued, with the farmers and their new threshing machines the main targets of the rioters. It was no surprise, therefore, that at this time, the movement really took off. Over the next forty years, the allotment movement grew to 242,542 sites covering 58,966 acres.

The success of the nineteenth century allotment scheme was due in no small part to the establishment of the high profile, active and effective Labourer’s Friend Society (LFS). This Society was established in 1815, and was a field leader in promoting and raising awareness of allotment grounds, and, most importantly, helping labourers to acquire land. The voice of the LFS was the Labourer’s Friend Magazine, which gave useful practical information on, for example, setting out allotments and tenancy agreements and rules.

Potato grounds were quite different from allotments and only used for growing potatoes and not other crops. Usually, they were sited in uncultivated areas of fallow land, sometimes at the edge of fields. Farmers let potato grounds to employees at a market rent, or as part of a labour contract, in lieu of wages. They were commonly offered on a temporary or seasonal basis, and often during a subsistence crisis.

Tied labour ensured the farmer had an affordable and guaranteed labour pool at harvest time, which was particularly important during the Napoleonic Wars because of the rise in wages due to the shortage of manpower. With the return of the men from the Napoleonic Wars, there was a glut of labourers, and farmers no longer needed tied workers. Eventually potato grounds became more important for the income they generated than as a labour pool. Later still, they fell out of favour altogether and disappeared.