Ford Lane Allotments could have won a prize as the worse site in the area. A few struggling plot holders on patches surround by derelict land with falling down sheds, piles of rubble and worse. 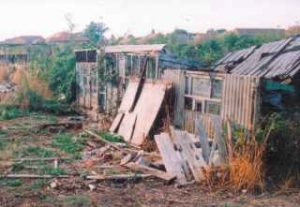 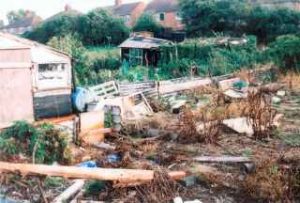 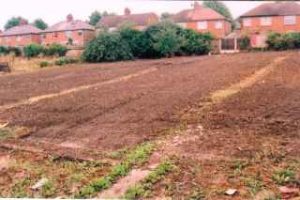 Allotment Regenerated
Having cleared the rubbish, the council were persuaded to rotavate the plots 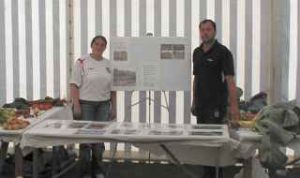 Promoting the Allotments
An important part of the strategy

Even the keenest gardener would not have been enthused by the thought of taking a plot on there.

There had been some efforts at improvement, but without real commitment they had not made a huge difference. Moving the deckchairs on the Titanic!

Since Nicki and Garry have come along, the site has improved beyond recognition. Most of the rubble and derelict buildings have gone and the site is gaining plot holders.

Nicki and Garry keep chickens on their plot, ranging in a fruit cage they produce around 20 eggs a day and I can tell you they taste wonderful.

Keeping hens under fruit is actually a great system. The hens benefit from scratching around to find those tasty bugs and the fruit benefits from the lack of bugs and a bit of nitrogen fertiliser.

Hens much prefer to have some trees or bushes over them to shade them from hot sun and to hide from eagles!

(Don’t tell the hens there are no eagles, they won’t believe you)

The reason for the success is the site regeneration is that plot holders were willing to take ownership of the problem and resolving it. Of course the local council who owned the site were deeply involved but without plot holders on the ground to manage the regeneration it would not have happened.

Eventually the site would have had no plot holders and probably ended up as building land.

Having cleared the rubbish, the council were persuaded to rotavate the plots so new plot holders took over clean plots, ready to plant.

As well as turning the site around and running a successful allotment, Nicki and Gary promote the site and here they are at the Crewe & Nantwich show with a very well put together stand. Enthusing existing plot holders and recruiting new.

Under-occupied sites are the ones where the weeds grow and rubbish starts to appear. High occupancy and good management are the factors that make a site work.