In recent years some exceptionally virulent strains of blight have arisen and the conditions for blight to survive, warm and humid, have become more common. Blight is becoming the number one tomato problem in some wetter areas of the country. 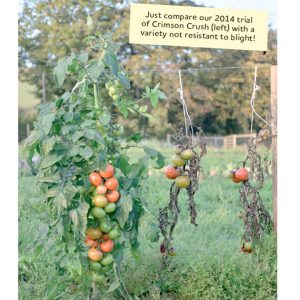 Many gardeners, myself included, are not willing to use chemical sprays on crops like tomatoes where we can be spraying the fruits that we will later eat. Spraying potato foliage is one thing, but tomato fruits another.

This leaves us with one choice, grow resistant varieties that may not be affected or at least not badly affected by blight should the conditions be right and it strikes.

Luckily greenhouse tomatoes often escape the blight so long as conditions in the greenhouse are not too humid and the leaves not wet as the spores are being kept out to some degree.

Many outdoor tomato growers and potato growers have given up in despair but with both potatoes and tomatoes now having the blight resistant types it’s worth trying again.

Don’t expect perfection, these are blight resistant not totally immune. Resistant does not mean immune or invulnerable. Especially with blight which has various strains and mutates, any resistant plant can be taken down by one strain and shrug off another.

What it does mean is that a blight-resistant plant is more likely to be productive when blight is about than non-resistant varieties. With blight-resistant Sarpo potatoes I’ve found my plants to be standing proud when all the other potatoes on the whole allotment site had gone down. 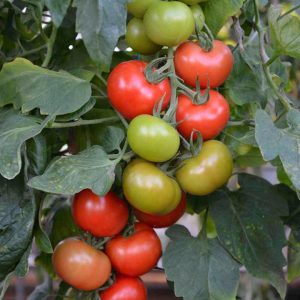 These new cordon tomatoes are the result of eight years of research and development between breeder Simon Crawford and Bangor University PhD student James Stroud. A cordon variety it provides fair yields of good tasting, large round tomatoes.

In trials of Crimson Crush when a solution of blight spores are applied to the plant 10% of the plant may be affected, but this does not mean that 10% of the plants will die. For example the plant will lose 10% of its leaves, and therefore 10% of its photosynthetic ability which will not prevent it from cropping or kill the plant, but a few leaves will show some signs of infection.

As Simon Crawford the breeder states

“Crimson Crush remained relatively free of blight but it is not immune, showing around 10 percent of infection when controls such as ‘Ailsa Craig’ were 100 percent infected”

In blight trials it is the percentage of leaf infection that is tested so the quote above shows the difference between a non-resistant variety “Ailsa Craig” which was wiped out and “Crimson Crush” which sustained a very small amount of infection and continued to grow and fruit.

“I confirm that in the trials at Bangor University, none of the Crimson Crush tomatoes were killed by blight and all of the plants went on to produce fruit with no problem”

Comments from site visitors to a trial offer of Crimson Crush we ran in 2015 backed up the blight resistance. Flavour was judged to be somewhat bland by many and total yields lower than some other varieties.

However, better a lower yield of somewhat bland (by home grown standards) tomatoes than no tomatoes at all because blight got them. 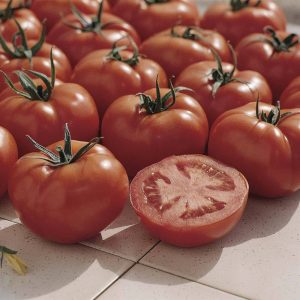 Ferline was originally bred as a commercial glasshouse cordon tomato so it is a vigorous, consistent cropper producing deep red fruits of up to 150gm (5oz) in weight with a very good flavour.

Superseded by smaller fruiting varieties in the commercial world but still popular with those who like a ‘proper’ tomato.

It has good resistance to verticillum and fusarium wilt and in trials Tomato Ferline has shown impressive blight tolerance in a garden situation. 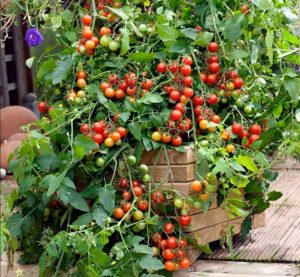 Good blight resistance. A compact dwarf bush type that is very easy to grow (no side shooting), Lizzano is equally at home grown in a sunny spot in the garden or in a large container on the patio.

A small-fruited variety for outdoor basket or container growing. 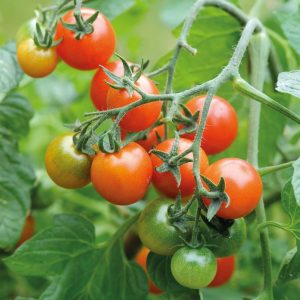 Producing masses of sweet and juicy cherry tomatoes that can be harvested over a long period from July to September.

Losetto is ideal for containers or planters in the greenhouse or on the patio, but can also be planted in a sunny spot in the garden in the south of Britain.