The range of tomatoes available is huge and new varieties appear every year. The sheer choice is bewildering. It’s no wonder I often get asked what are the best tomato varieties?

There is no clear-cut answer as to what are the best tomato varieties – it depends on what you want them for, where you are growing them and your personal tastes.

For a greenhouse, especially a small greenhouse, I suggest you stick to cordon (pole) varieties that give the most crop for the least floor space. Given a large polytunnel or if I was growing outdoors in the warmer south of Britain then I’d grow some large bush plum varieties for bottling and saucing.

We always grow some small bush cherry tomatoes – these can go in hanging baskets or pots on the patio come the warmer months after being initially grown on in the greenhouse. Great for salads or just picking and eating from the plant on a sunny day for a refreshing treat.

There is no way any one grower can try every variety so each year I grow those I know I can rely on and will enjoy plus a new to me variety or two. Sometimes these new varieties make it to my favourite list, most often not. But variety and change keep life interesting.

Anyway, these are my five favourite varieties and some comments on other varieties of tomato I’ve grown and tasted over the years. 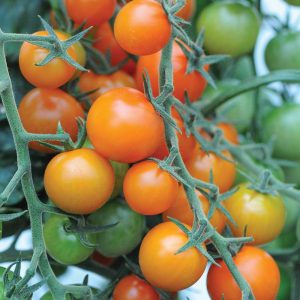 This is a particularly vigorous cordon variety, being an F1 hybrid and really leaps away. It is one of the first to crop and because it is so vigorous, I have had success both under cover and outside.

The fruit is small but plentiful and an orange yellow colour rather than red. Too sweet for cooking, it is gorgeous alone or in a salad.

A favourite with the kids. If I only grew one variety this would be it if only to delight the children. Tomatoes have to be better for them than chocolate!

Generally Available and from Thompson & Morgan 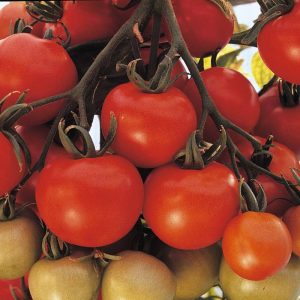 Craigella is a variety developed from Ailsa Craig and identical in growth, yield and taste but unlike its parent, it does not suffer from green back as Ailsa Craig is prone to do.

If you can’t get Craigella, get Ailsa Craig. It’s susceptible to green back but that’s a price well worth paying for the flavour.

Generally Available and from Thompson & Morgan 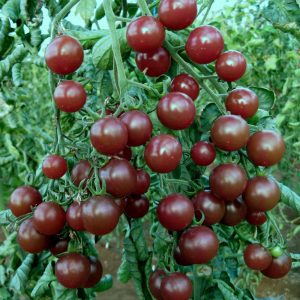 A newish variety that has made my favourite list. The deep purple black colour is striking but the flavour is why I grow them. Sweet but still retaining that touch of acid that makes a tomato for me. Very juicy.

We like them halved, drizzled with olive oil and sprinkled with a little torn basil for a fantastic side salad. Don’t forget some crusty French bread to dip up the juice!

A cordon cherry they’re easy to grow and high in anthocyanins and lycopene so healthy as well as enjoyable. They’ve replaced Black Russian in my list. 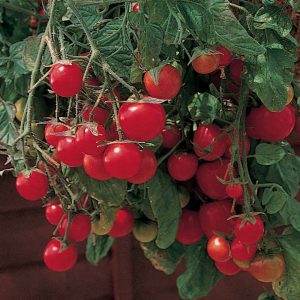 One plant is enough so we grow two in case one fails in jardinières with lobelia around the edges and give loads away. Decorative and productive on the patio.

I’ve not found a tumbler type of tomato whose flavour I like as much. 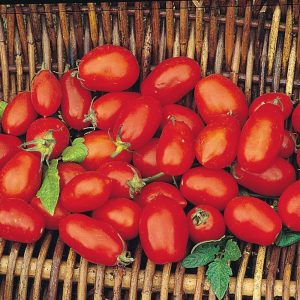 A large bush tomato, generally available. Firm fleshed and good flavour. Ideal for bottling or freezing to provide cooking tomatoes later in the year or for converting into sauce.

Quite slow to crop which makes them vulnerable to short seasons and late-season blight. They plants are too big really for a greenhouse but I think they would do really well in a large polytunnel.

I only succeeded by growing on in the greenhouse in 8″ pots until the weather warmed and then using a fleece tent towards the end of the season. If we lived further south I’d grow them every year.

All pictures courtesy of Thompson & Morgan