Ringculture is a traditional method of growing tomatoes that was as a commercial method of greenhouse tomato growing but has developed to become a popular home growing method in conjunction with growbags. 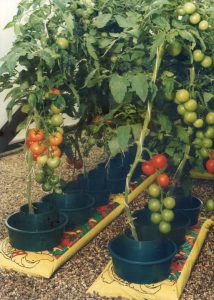 Ring culture developed as a commercial method of greenhouse growing tomatoes that ensured the plants had plenty of water and nutrients but with less labour than that involved in digging out and replacing border soil.

Ringculture was also used for cucumbers, peppers, melons and chrysanthemums.

A trench was dug about 15cm deep and lined with polythene to prevent the water seeping away. The trench was then filled with an inert aggregate and bottomless 20cm pots filled with a growing compost set a few centimetres into the aggregate.

The aggregate can be gravel but more usually a lightweight material such as hydroleca, or perlite.

Hydroleca is a lightweight clay aggregate formed by special clay minerals expanded at a high temperature that produces ceramic “pebbles” with a smooth outer crust and a honeycomb interior.

Perlite is a silica mineral of volcanic origin that, when crushed and heated to a high temperature, expands to resemble popcorn. The microscopic bubbles in the perlite granules absorb and hold large quantities of air and moisture

There are specialist pots for ring culture which used to be known as whalehide pots but I don’t think they actually were made from whales! Biodegradeable bottomless pots can still be found with some searching.

The tomatoes are initially planted deeply into the pots and as the season progresses the pot is topped up with more compost. If you look at a tomato plant’s stalk you’ll notice little hairs which are actually adventitious roots. These hairs develop into roots once covered in soil or compost. The more root growth, the more nutrients the plant can absorb to produce the crop.

The aggregate is watered and has liquid feed added which also rises into the pot by capillary action. Initially you will need to add water to the compost though as the plant establishes. Growing this way is a hybrid between conventional and hydroponic growing.

At the end of the season the plants and roots are removed and then the aggregate washed clean and sterilised ready for the next season. Arguably less work than digging out a border and certainly less likely to carry diseases forward from one year to the next but still a lot of work.

A variation on the ‘professional’ ring culture is to grow in large pots with a number of fair-sized holes in the base set onto a deep (5cm) gravel tray. Once again the tomato is planted deep in the pot to develop the adventitious roots and eventually the roots come through the holes at the base and go into the aggregate.

In this method it is necessary to water/feed into the pot and with all pot growing of tomatoes care is needed to avoid washing the soil down from the roots near the surface, reducing their effectiveness.

With both methods there is the problem of a large surface area of water exposed to the air and evaporating which adds to the humidity and means frequent topping up. Too much humidity encourages fungal disease problems in the greenhouse which is one of the reasons that the old practice of damping down is comparatively rare nowadays. 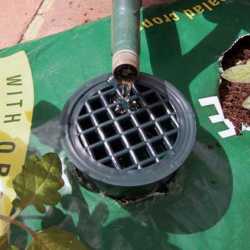 The ring culture concept has evolved with the development of the grow bag. A special pot consisting of a central tube in the pot, two concentric cylinders, is inserted into the growbag.

The growbag acts as a reservoir and the theory is that the feed is added to the central tube and water to the surrounding pot with the roots supposedly splitting into some seeking food and some seeking water. I’m not sure I buy that theory as in nature there is no way the nutrients would be separate from the water but it certainly makes it easy to water.