Growing Tomatoes in a Greenhouse

Growing tomatoes in a greenhouse is far more certain to produce a good crop than outdoors as you control the climate. In fact, I would not even try to grow outdoors in the ground north of the Midlands in the UK without some extra shelter. 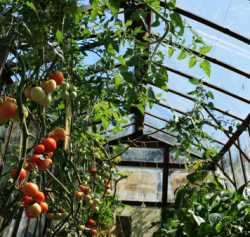 Growing tomatoes in a greenhouse is a large subject which I have broken down into a number of separate, in-depth articles which are linked to from this article.

The first thing is to decide which varieties of the hundreds available to grow. This is covered in:

Having decided which tomatoes to grow, this article covers sowing and growing on to the point where you are ready to plant out:

Where to plant in the greenhouse

You have basically three choices. You can grow in a border, pots or grow bags and I’ll cover the methods for each separately. 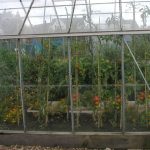 Growing Tomatoes in the Greenhouse Border

It is certainly more natural to grow tomatoes in a border than in containers. But for me the big advantage of growing in a properly prepared border over containers is that it stores enough water that missing watering for a day isn't a big problem. ... 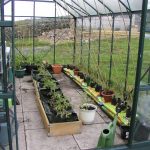 Growing Tomatoes in Pots or Grow Bags in the Greenhouse

The advantage of greenhouse growing tomatoes in pots and grow bags is that the compost is fresh each year. This means that it is free from disease build up and pests. Once the season is over, the spent compost from the pots and grow bags can be used as...

Supporting Cordon Tomatoes in the Greenhouse

As your tomatoes grow, they’ll require supporting. There are two main methods – string supports or canes.

Commercially and traditionally cordon tomatoes have been supported on string. This is anchored at the base of the plant and taken to a point usually on the greenhouse roof.

Once the plant has reach about 18” (45cm) high it is likely to flop over and it is time to string it.

The string is tied to a convenient cross-bar or point on the frame above the plant. It is taken down to the plant and tied to the plant by creating a loose noose at the base. Then it is wrapped around the plant a couple of times

As the plant grows the twine is twisted around the plant supporting it. It is very easy to do and quick to continue as the plant grows. Initially do not put too much strain on the plant or you can pull it out of the pot or border.

The other method for supporting cordon tomatoes is to insert a bamboo cane by the plant and tie the stem to the cane as it grows. I use a figure of eight with the string so the plant stem has room to expand as it grows.

Commercial growers grow cordons at an angle rather than vertical. Those guys know what they’re doing and if you have the room it may increase yield – although home growers are looking at just 5 to 7 trusses not the 25 + trusses of the commercial grower’s tomato plants.

The ideal temperature would be between 20ºC and 24ºC in the day, allowing it to drop to no lower than 18ºC at night. You can get away with lower temperatures but most harm is done by home growers allowing their greenhouse to overheat in the summer.

The use of shading to prevent over-heating is a good idea most summers, even in Britain. There’s a more detailed article here:

I touch on watering for both border-grown and container-grown tomatoes in the specific articles on those mentioned above.

There is an article specifically on water requirements of tomatoes here:

And an article on equipment to help with greenhouse watering here: 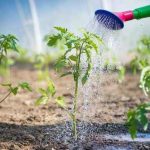 More people have problems due to irregular watering with tomatoes than any other cultivation issue. Allowing tomatoes to dry out and then deluging them with water causes the fruit to suddenly swell, cracking the skin of the tomato and this allows fungal...

The feeding regime for tomatoes is quite straightforward. When the first truss has set, which means the flowers have gone and you can see tomatoes beginning to form, it’s time to start feeding. Begin feeding either with a commercial feed as per the instructions or home-made feed such as comfrey liquid on a weekly basis.

I would always use a good quality commercial feed with trace elements to prevent magnesium deficiency rather than cheap commercial feeds. Towards the end of the season, I replace one feed in three with a high-nitrogen general feed such as Miracle Gro. It seems to help the plant maintain its general health and extend productivity.

Apart from feeding and watering, with cordon tomatoes in the greenhouse you will need to remove side-shoots to encourage fruit production and stop the growth towards the end of the season. 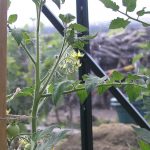 I have noticed that many American web-sites refer to suckers rather than side-shoots. Suckers in Britain are stems growing from the base which occasionally happens with tomatoes. Since I don't think the Americans will change their language for me, if...

As the season draws to a close, it becomes a race to ripen the crop prior to the frosts. To help this along, remove the lower leaves and expose the fruits to the sun. By this stage the plant does not need as much energy so the leaf removal will not affect it.

At the end of the season before the first frost, harvest all the green tomatoes of reasonable size and these can either be ripened or used in chutney etc.

You can also hang up the vines with fruit on in a frost-free, cool dark place and they will slowly ripen. If kept in a bowl with a ripe banana they will ripen quickly due to the gas given off by the banana