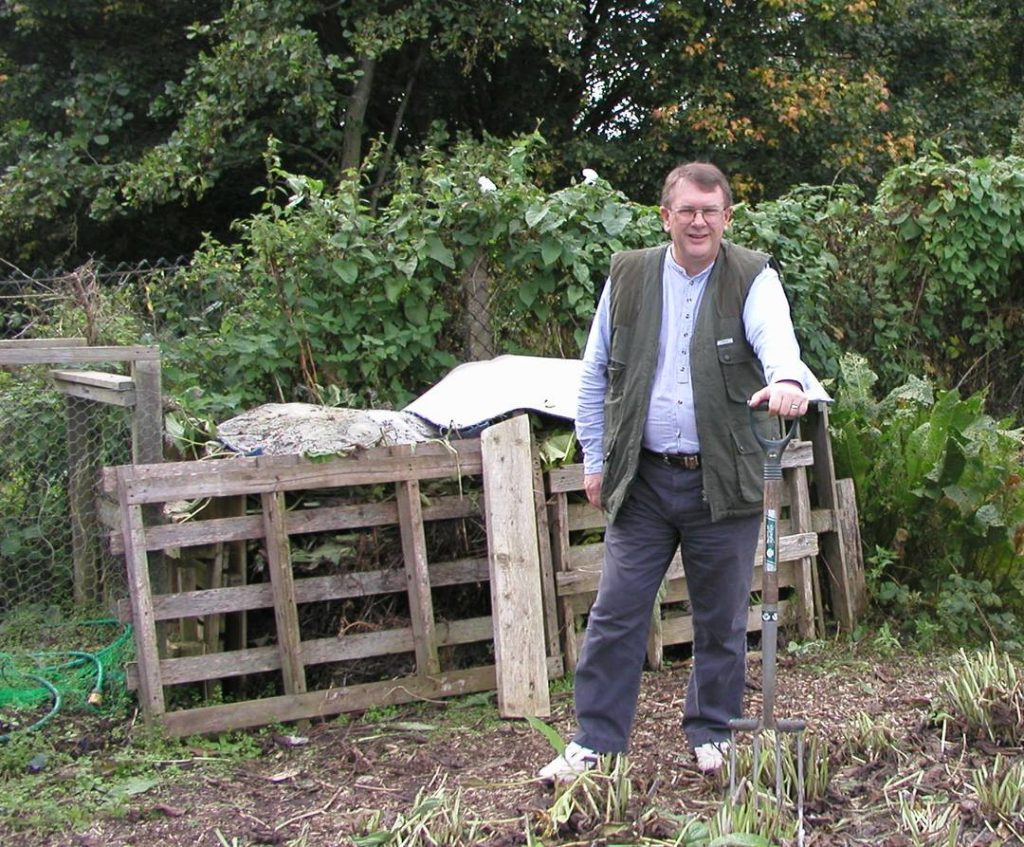 There are whole books on how to make compost but it’s essentially simple and easy. The basic method I use for garden waste is a refinement on the method promoted in the Dig for Victory campaign of WW2.

The benefit of this method of making compost is that is simple and doesn’t require any special equipment. It can even be done without a bin by just building a compost heap in a convenient place on the plot.

It is more efficient and easier to get consistent results using a bin though. Building a perfectly serviceable compost bin with two bays can be easily done in less than an hour using old pallets. See Building a Compost Bin from Pallets.

Compost is a bit confusing to say the least for new gardeners. The term ‘compost’ is also used to refer to growing mediums like multi-purpose compost, seed compost, John Innes compost etc. Commercial composts are made by combining materials with a base like peat or coir and sterilised to avoid problems with diseases and weed seeds sprouting.

Home made compost is quite different and usually used as a soil conditioning fertiliser. One of the major benefits of compost is that it not only adds humus and the major nutrients (NPK) but a multitude of micro-nutrients from the varied ingredients.

Manures like horse, cow, sheep etc. are valuable and important to the vegetable plot but because of those micro-nutrients home produced compost is arguably of more value. In an ideal plot you would add manure every 3 years but compost can be added every year and during the growing season too, which is not normally the time to add manure.

Home made compost is the result of microbial and fungal digestion of material with help from worms in the presence of oxygen. This is technically called aerobic digestion and differs in process from anaerobic digestion which is used by commercial plants for producing power from food wastes, manures and specially produced crops like maize.

What can be composted?

The simple answer is anything organic. If it has grown or, like dung, been produced by an animal or is a dead animal it can, in theory, be composted and recycled. This method is suitable for composting most garden waste, some food wastes, herbivore manure in moderation and some other materials.

What you should not compost by this method:

How long does compost take to make?

How long the compost will take depends on a number of factors. The compost will be produced faster in warm summer weather and slower in winter. The size of the pieces will affect the timing. Smaller pieces, i.e. shredded, will break down far faster than large.

A summer compost can be produced in six weeks on average with this method but a winter compost is likely to take 3 or 4 months.

If you read up on composting you will come across references to ‘Greens & Browns’. By ‘greens’ they mean leafy materials which are fairly high in nitrogen and by ‘browns’ materials rich in carbon. The reason is that they want to balance the carbon-nitrogen ratio to optimise the composting process.

Personally I think far too much is made of this, at least in basic compost making. Adding shredded paper or torn up brown cardboard adds ‘browns’ to the mix but more importantly helps to keep the compost open allowing air to the microbes.

Dried out weeds, twigs and chipped wood all add those carbon-rich ‘browns’ but don’t worry about balancing and getting the right ratio. In my experience I’ve successfully had excellent compost without adding any ‘browns’ to the ‘greens’

Collect a pile of garden waste, preferably enough to fill the compost bin. It doesn’t matter if it takes a week or two to collect a reasonable amount.

Start by putting some branches or stalks from sweetcorn etc. at the base. The reason is to allow air to enter the heap from the base. When the heap heats up it will draw air in rather like a bonfire.

If you have a shredder, now is the time to shred any tough or woody materials like brassica stems. Don’t shred until you are actually building the heap or things will heat prematurely and partially.

Shredding reduces the size of the materials, which means an increased surface area in relation to volume. This allows the microbes to get to work more efficiently and the heap will heat up far faster. In fact with shredded material it will be heating up before you’ve finished building the heap! 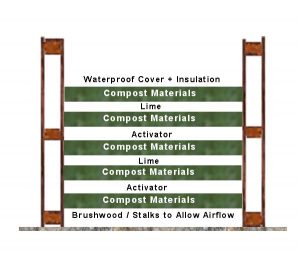 Put a layer of leafy materials down and then whatever you have about 15 to 20 cm thick. Mix your Browns and Greens as you go.

Another activator you can use is urine, diluted 10:1 and sprinkled through a rose on the watering can. Urine is sterile when produced so perfectly safe if a little distasteful. A bottle in the shed to build up the store is useful as direct application in public view could get you arrested!

Next place another layer of composting material down and this time, instead of an activator, dust with garden lime. A good handful is usually enough for the average heap.
The lime will counteract acidity caused by the activator and keep the heap sweet for the microbes and worms.

Follow this with another layer of material, followed by an activator and then another layer followed by lime. Keep repeating until the bin is full. If the green waste is proud of the bin, don’t worry as it will go down very quickly.

If the materials are dry, wet them with a watering can as you build the heap. You don’t want it soaking wet, just nicely damp.

Older books often used the layer system for composting but with the addition of a layer of soil to ensure the necessary microbes were introduced into the heap. It’s not really needed as the weeds will have soil on their roots.

Neither is it necessary to inoculate the heap with material from a previous heap.

Topping off the Compost Heap

Top off the heap with something to stop rain soaking into the heap. I used to use old carpet but this is frowned upon on many allotment sites now. Plastic sheet will do fine. Outside of summer’s hot weather, layer some sheets of cardboard on top of the heap under the waterproof sheet to keep the heat in.

After anything from a few hours to a week, the heap should heat up. Ideally we want it to hit around 60ºC in the middle. You should be able to feel the heat with your hand and see steam rising from the heap.

If it seems to be drying out, sprinkle with a can or two of water using a fine rose.

After a while the heap should have reduced to about half of the original size and be cooling down. This is the time to turn the heap. The task is made a lot easier with a two bay bin system.

Once again, start with a layer of woody material to allow air to get into the heap. This material may take a few years to rot down but that’s OK as it’s just re-used until then.

Finish off with some insulating cardboard and a waterproof sheet. The heat should re-heat although rarely as hot as the first heap. If it fails to go water with dilute urine or sulphate of ammonia mixed in water to re-activate it.

Once the heap has cooled down and shrunk, the compost is finished and ready to use. It should be dark in colour, crumbly textured and sweet smelling. You shouldn’t be able to recognise any of the original materials except the sticks used at the base to get air in.

These and any undigested material can be picked out and put into the next heap.

If it’s going to be a while before using the compost, keep the rain from washing the nutrients out. 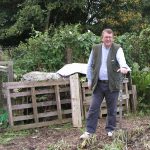 There are whole books on how to make compost but it's essentially simple and easy. The basic method I use for garden waste is a refinement on the method promoted in the Dig for Victory campaign of WW2. The benefit of this method of making compost... 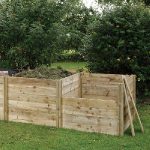 How To Build a Compost Bin

Compost is the engine that keeps our gardens and allotments productive. To make compost, a compost bin is ideal. You can often buy a compost bin cheaply from your local council but you can also build your own compost bin for next to nothing - except a... 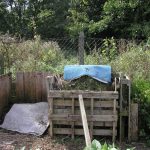 How to Build Compost Bins from Pallets

Building compost bins from pallets has to be the quickest and easiest way to produce a pair of serviceable compost bins. You will need 7 pallets of roughly the same size, some scrap wood, wire, nails and cardboard. Pallets come in different... 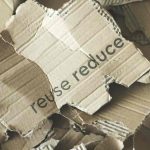 Cardboard and paper can be a valuable resource for the gardener. Being rich in carbon it is useful for balancing compost ingredient. Used directly as part of a mulch system it suppresses weeds and improves soil quality. What Cardboard & Paper... 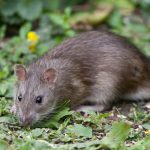 There's a rat in the compost, what am I gonna do! (apologies to UB40) I was asked if it was safe to use compost on vegetables from a heap where there had been rats. I've heard it said that you're never more than 10 feet from a rat in the... 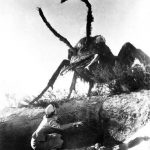 Ants in the Compost Heap

I was asked this question; My compost heap is overrun by ants – can I use the compost to earth up potatoes and for other uses? The simple answer is yes, compost infested with ants is fine for earthing up potatoes and other outdoor uses. Ants N...