Types of Cabbage – Growing Cabbages All Year Round

Cabbages have formed an important part of our diet for thousands of years as a staple food, rich in vitamin C, both in Europe and the far-east. It is possible to have fresh cabbage all the year round (assuming the snow isn’t too deep or the ice too thick!) 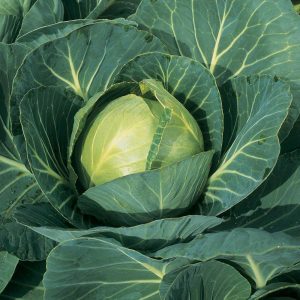 From the original wild ancestors we’ve bred varieties that mature at different times, are tight headed or loose and green leafed or red. Cabbages are defined by when they are ready for harvest; Spring, Summer and Winter although Summer cabbages will stretch on into autumn.

White (green cabbages are known as white for some reason) varieties are ideal for coleslaw and all cabbages will make sauerkraut. Red cabbages are great for pickling but fine cooked or even raw in salads

Ball-head cabbages will happily store on slatted shelves in a cool, dry and dark larder for months. Slatted shelves allow airflow or you can hang them in nets. Before storing, remove loose outer leaves and the inevitable slug hiding in there as well! A quick rub with salt is a good idea to catch any slugs you’ve missed. 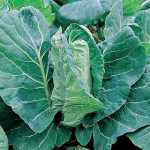 Spring cabbages are usually sown in July and August being planted out in September and October to slowly grow over the winter and be harvested from late February through to the beginning of June.

They tend to be conical in shape and quite loose leaved. You’ll often find them referred to as spring greens or collards.

In windy areas, earth up around the stem and compress the soil with your foot to ensure the plants are stable and don’t suffer root rock. Alternatively shield from the wind with windbreak netting or grow in tunnels under windbreak netting. 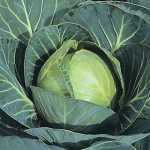 Usually these cabbages have the leaves tightly compressed into a ball and are known as ball-headed or drumhead cabbages.

They’re sown from mid-February under glass to mid-May being planted out in May and June to provide a harvest from late June to November although more usually August and September are the prime harvesting months.

Most tend to be round in shape like a ball made of tight packed leaves although the Greyhound and Hispi varieties are conical like spring cabbages. 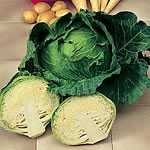 The winter cabbages are generally sown in late April through May, to be planted out in July so as to provide a harvest from November right through to March.

In cold areas it’s worth checking how resistant the individual variety is to cold weather.

In cold areas go for varieties like Tundra that can cope with most anything the British winter can throw at it. 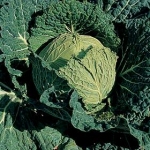 The savoy type of cabbage is essentially a ball head cabbage but the leaves are crinkled rather than smooth. Sowing and planting are just like winter cabbages except the cutting season tends to be a little longer.

Many people prefer the texture and flavour of savoy cabbages to smooth ones. 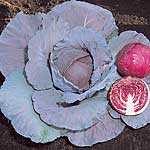 Red cabbage is traditional for pickling although you can pickle white varieties. Red cabbage is superb for adding some colour to a boring winter salad when shredded finely.

Cooked it adds colour as well as flavour to a meal – try this method of cooking cabbage.

Grow just like a summer cabbage, sowing in April, planting in June and harvest in September. They will hold a while in the ground or can be stored for a few months as with white ball-head cabbages. 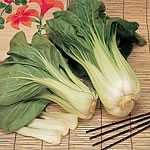 Chinese cabbage, also known as Pak Choy and often called Chinese leaves in supermarkets are the odd one out in the cabbage family. They look more like a cos lettuce than a cabbage.

The cultivation method is completely different than conventional cabbage as well, they do not like root disturbance and usually would be sown in situ rather than being transplanted.

Some suggested varieties of cabbage

Hispi F1 An outstanding variety. A remarkable achievement in hybridising. Hispi can be grown at virtually any season of the year and comes to maturity faster than cabbages specially created for specific seasons. Even autumn sown it will beat the earliest of the spring cabbages. It is a pointed type, strong and uniform and with a beautifully sweet flavour. A Jan/Feb sowing fills the late spring gap in cropping. Bolt resistant.

Savoy (Winter/Spring) : Tarvoy F1 Significant advantage to the home gardener. Once mature, remains in harvest condition for several months. Just two sowings of Tarvoy will provide Savoys for 3 seasons of the year.

Tundra F1 Seeds This impressive cabbage has superb resistance to really hard winter weather. The medium-large heads are formed from November to February and the internal structure is crisp and tasty. For cutting in winter – maturing time approximately 28-32 weeks from sowing.

Tatsoi Supi Seeds Versatile and easy to grow Pak Choy greens which can be picked as tender young leaves for salads or allowed to grow to full size maturity. The glossy green leaves are ideal for stir-frying or steaming.

If you have clubroot on your plot then these varieties will help but do remember resistant isn’t the same as immune and you should follow the instructions for growing brassicas on clubroot infected land:

Kilaton F1 – Kilaton has a high level of Club Root resistance producing quality, 2kg, autumn ballheads with a solid, dense structure. Superb used for coleslaw, salads or steamed. It has taken over 18 years of conventional breeding to develop a variety that can combat the devastating brassica disease Club Root and this superb variety is the most resistant we have ever grown on our trials.

Kilaxy F1 – Highly resistant to Club Root disease. In trials it produced an excellent crop on infected land where other varieties become stunted and failed. A top quality late summer/autumn cabbage of the round headed Dutch White type, with solid compact heads of around 2kg in weight, which both stand and store well.

Minicole F1 – A compact, uniform Dutch White cabbage maturing in early autumn from a sowing in April. The heads stand in condition for a remarkably long period, and are of an ideal size for smaller families. Summer/Autumn maturing.

Hispi F1 (AGM Winner) – A pointed cabbage of Greyhound type. Large solid, uniform heads. Can be autumn sown, wintered in a frame and planted out early for use in spring. Recommended for exhibition. Summer/autumn cutting – maturing time approximately 20-26 weeks from sowing.

Pixie (AGM Winner) – By far the best pointed cabbage around, with a hard head of mid-green and a fine, tasty internal structure. Early to mature and can be closely planted. For cutting in spring – maturing time approximately 36 weeks from sowing.