How to Grow Tayberries – A Guide to Growing Tayberries 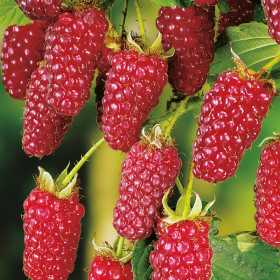 Tayberry (Rubus fruticosus x ideaus) is a cross between a blackberry and a red raspberry, and is named after the River Tay in Scotland.

It was patented in 1979. If there is only space to grow one hybrid berry, a tayberry is an excellent choice. It is prolific and within two years will give delicious crops of large sized sharp-sweet fruit, dark purple in colour when fully ripe in late July through into August. The canes usually drop most of their leaves in the Autumn.

Un-named thorny floricane, which  fruit on canes grown the previous season varieties are often available relatively inexpensively, and will give a good crop.

Buckingham is readily available, and is a thornless floricane variety. Being thornless is an advantage when training the canes and harvesting. It provides berries up to 4cm in length.

Medana is reputed to be a heavy cropping variety.

Tayberries are easy to grow and are rarely troubled by any problems. They can occasionally be affected by raspberry beetles, whose grubs cause dried patches at the stalk end of the fruit, but these can be controlled by spraying with a control containing deltamethrin,  when about 80% of the petals have fallen.

Although birds are fond of pecking the ripe fruit, growing the canes vertically prevents easy access by birds, and most fruits are undamaged.

Tayberries are vigorous plants and should be planted about 2.5m apart. When planting, ensure they are well watered in, and give the plant a general fertiliser such as Blood, Fish & Bone.  A further feed each Spring, together with a mulch of rotted leaves or compost over the root area, and they will thrive.

They grow well in well drained soils.  It is advisable to keep plants well watered in their first year, but after that they manage without additional water unless conditions are extreme.

Tayberries grow best when supported on wires or against a sunny wall, and each plant needs a space of around 4 sq m.  The plants are heavy when fruiting and upright supports need to be firm enough to take this weight and avoid collapse.

Floricane varieties flower and fruit on the canes that have grown the previous year. Once these have fruited, they should be cut out at ground level, and new canes –that will be already part grown – tied in to give the following year’s crop.

Primocanes ( Medana for example)  flower and fruit on the growth made that year, and can be completely  cut down to the ground once fruiting is ended. New growth developing in the Spring should be tied into the supports provided.

Tayberries pull off easily when ripe, retaining the plug they are attached to, in the same way as blackberries.  When fully ripe they are sweet enough to be eaten with cream or sweetened yoghourt.

They make an excellent crumble or pie filling, and can be used for jam or jelly too.

They will store for a day or two in the fridge, and should they need to be stored longer, freeze extremely well. Freezing them on open trays and then bagging, means the fruits stay separate and can then be used in the same way as fresh fruit.