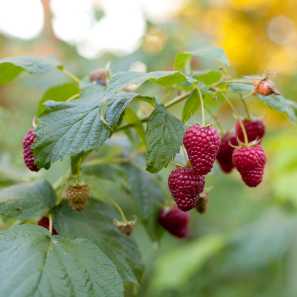 Raspberries (Rubus ideaus) are a self fertile cane fruit which prefer a slightly acidic soil, which drains well. They are prone to root rot in waterlogged soil, and dislike really chalky soils. They do well in a sunny spot, but will tolerate partial shade.

Most varieties bear red fruit, but some are yellow, black or purple. All are deciduous.

Raspberries are best planted as leafless canes, usually cut back to about 30-40 cm, in Spring. All weeds should be removed prior to planting.

Raspberries thrive if given some well rotted manure or compost in the hole, and some Fish Blood and Bone sprinkled onto  the surface of the soil around them and raked in lightly. A mulch of old Autumn leaves or garden compost keeps them from drying out. Despite the long list of possible problems and diseases, raspberries are usually very straightforward and give a very worthwhile crop.

Summer fruiting varieties (floricanes) can grow very tall and need support. The traditional method is to fix two posts about 40-50 cm apart at one end of the row and two at the other, with wires fixed firmly between the two long sides to support the canes on both sides to stop them blowing over.

If you are only growing three or four canes, they can be spaced around one post and tied in with wire around the canes. Summer fruiting varieties  will not fruit in the first year they are planted, but will flower and fruit the following year. Once the fruit has been picked, these brown canes should be cut out at ground level. The green canes that will grow will flower the year after and so should be trained in between the wire supports.

Autumn fruiting varieties (primocanes) flower and fruit on the growth made earlier in the same year, and so will fruit the first year after being planted. These tend to be shorter than Summer fruiting varieties, and so do not usually need support.

They fruit on the growth made that year, and so each cane can be cut down to the ground in the Spring, ready to start again.

Both types benefit from Fish, Blood & Bone early in the Spring once the ground has thawed, and a top up mulch. Collecting up and disposing of fallen Autumn leaves will improve hygiene and reduce the chance of disease.

Raspberries spread by underground runners, which need to be removed by pulling up, to keep the fruiting canes in their planned area. Do not use weed killer on these shoots, as it will travel back to the main plant and may kill it.

Raspberries should be harvested as they ripen. When picked, they leave the core of the fruit on the plant, and must be handled gently. Crops can be very prolific and so there are usually enough to eat with cream –look at the price of fresh raspberries in the shops! – as well as enough to make jam, jellies, syrups and to decorate cakes and other puddings

They will store for a day or two in the fridge, and should they need to be stored longer, freeze extremely well. Freezing them on open trays and then bagging, means the fruits stay separate and can then be used in the same way as fresh fruit. 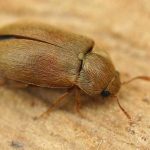